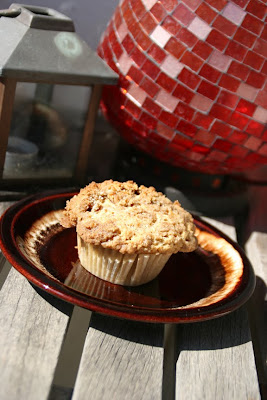 This week's entry for Tuesdays with Dorie was chosen by Kayte (Thanks Kayte!) of Grandma's Kitchen Table: Allspice Crumb Muffins. I don't do a lot of baking with allspice as the main flavor note - usually it's just one component in a blend of spices - so I actually went all-out and bought a little packet of fresh allspice instead of using the 100-year-old bottle that's been languishing in the back of my kitchen cupboard gathering dust. I had to move the 100-year-old mace to get to that one. These muffins were pretty good - John and the girls liked them, and I didn't have the sliding streusel problem some other bakers seemed to have. I'm not sure why, because I didn't press the crumbs down into the batter or anything; what I did do was load each one up with so much crummage (crumbage? That seems wrong...) it seemed like overkill, but I figured there had to be a reason there was so much of it and I suspect the sheer weight of it kept it in place. I followed the recipe just as written and included the optional grated lemon rind because I'm always all about the grated lemon rind. The crumb topping was the best part - isn't it always? - and I had just about decided that I probably wouldn't make these twice when I tasted one the day after baking them...it was actually a little better and it was still moist and delish. Maybe I'll try these again with cinnamon or a blend of spices. Or maybe I'll bust out the allspice again. It did feel very much like fall was in the air.... 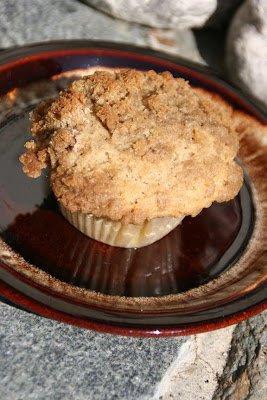 I am still laughing over the crummage or crumbage. Very cute! I loaded my muffins up with the streusel so there was still plenty on top when done. Your allspice muffins look great! and the flavors were definitely fit for Fall.

I made it for two times but sound not good... but when i see your muffins ..its yummy.. looks great..

They look great...especially the crumbage! Love that term, now in my vocabulary to stay! See, you learn something new on visiting all these blogs all the time. Thanks for baking with me this week...your muffins look beautiful and delicious.

I ate the one on the plate. A benefit of being the husband is that I get to eat the "hero" piece of art/food. Very delicious.

oh the muffins look delish--particularly because of all the crumbage!