"Boil for one minute, then stand back and carefully ignite the Kirsch." 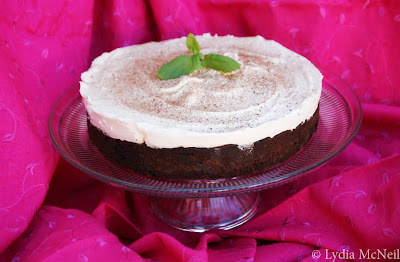 First let me state for the record that I despise cherries in baked things. After being subjected to heat they always looked like some kind of organ to me, and organs in my dessert? No thank you - I'll pass. Cherries from a tree eaten out of hand, yes. Maraschino cherries? Double yes, especially accompanied by rum, fruit juice, and a tiny umbrella. But cooked? No. No thank you. Not even chocolate can change my mind on that. 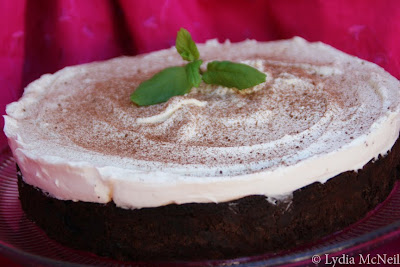 But here I was faced with this week's Tuesdays With Dorie selection: Cherry-Fudge Brownie Torte. I figured I'd just knock it out and get it over with and take it with me on the bus to the Head of the American River, to be consumed by a horde of hungry teenaged girls. That was when I pre-read the recipe and came upon these directions: "...stand back and carefully ignite..." and I thought, maybe I oughta wait until John gets home from work so he can either: a) man the fire extinguisher or b) call 911 or c) all of the above. Plus...mousse filling. Not really roadtrip friendly. 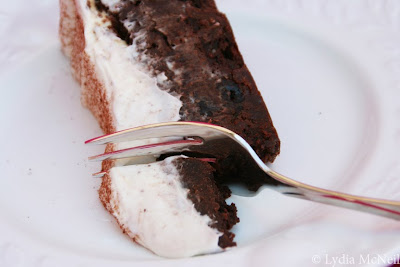 So last Thursday after John got home (so I'd have a spotter...you don't need one too often in the kitchen but every now and then when you attempt a particularly adventuresome maneuver it seems like a good idea) I made the brownie layer, cooled it, and left it in the fridge all wrapped up so I could go off on my chaperoning adventure and find it waiting for me when I got back. 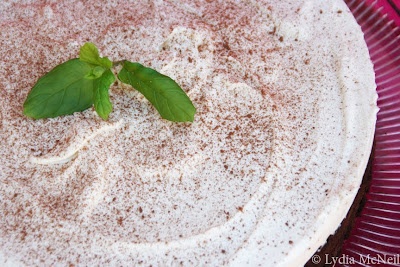 The mousse layer was simple to put together and delicious to clean up from - I don't often lick the beater blade but if you were trying to seduce me with food and didn't have any chocolate, a mixture of mascarpone, sugar, and heavy cream would probably do the trick.
Would you like to see a little video of me almost losing my carefully tended eyebrows? I knew that you would:
And would you like to know how the torte turned out in general? I ate the little slice you see pictured above, just to try it before I served it to my family. It was the bomb! It's more like Cherry Garcia than weird cooked cherries, and the bottom layer was fudgy and chewy with little chunks of chocolate still whole. I ate it and then I wished I had time to lie down because it was definitely kind of heavy, but the flavors were interesting and went together very well. Thanks for this week's pick, April!
Posted by Windansea at 12:05 AM

Email ThisBlogThis!Share to TwitterShare to FacebookShare to Pinterest
Labels: baking, Tuesdays with Dorie

Thank you for baking with me this week! I'm always a little concerend when I'm in charge of setting something aflame. So glad you like it, even though you aren't a cooked cherry fan. Your torte looks great, especially with the mint sprig!

Thanks April! I took it to someone's house last night and it was well received, and my family loved it too!

I'm a knitting blog lurker. I tend to never comment, but always enjoy others who are good at "public speaking". I've been following your blog for over a year and have always enjoyed it. MUST leave a comment this time - the video was priceless! Thanks so much for sharing!

Hahaha!!! Thanks Elizabeth! That means a lot to me - I'm glad you enjoyed it!

That video is CLASSIC Lydia. Although until you looked at the camera (so I could be sure it was you) I thought you were one of your daughters. You look sooooo young!

OMG, I loved this post! Soo fun and funny! =) I didn't flambe at all exactly because I didn't have a spotter (who knew you'd need one in the kitchen?)! And the video was great - I didn't know what would happen to the flames once it started!
Your torte turned out just fantastic and so glad you loved it! =)

Thanks Jane, you're my favorite friend, lol!!!