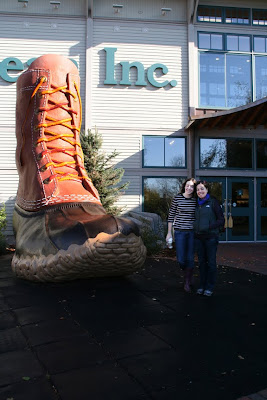 While I was on the east coast I stayed a couple of days after the regatta and drove up to Portland with Fiona. That's the other Portland for those of us west of the Rockies - the one in Maine, not the one in Oregon. I'd never been to Maine so I was especially eager to see it, and as a bonus I got to drive through New Hampshire so now I've been to all the New England states. It snowed big fat flakes all the way north from Boston to Portland, but the heater in our rented Corolla worked just fine and the radio had enough classic rock to keep us entertained all the way there. We had a lovely dinner with friends (haddock chowder and brie brioche - how brilliant is that, brie melted into the brioche? You put it in when you add butter to the dough, as opposed to wrapping a brie in brioche and baking it whole.) and on the second day we went up to Freeport, Maine, the home of LL Bean and a whole lot of other stores and outlet I didn't have time to visit. As it turns out, LL Bean does not consist of a warehouse with a bunch of telephones and ladies on rollerskates packing your order as you call it in - it's actually a large complex of stores, each with a theme like hunting/fishing, home, or what-have-you. They may indeed have a warehouse with rollerbabes but I didn't see one. 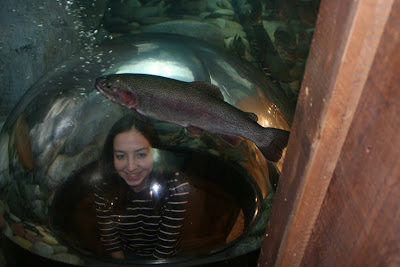 I made Fiona pose in the trout aquarium bubble and then I wandered around taking pictures of the stuffed animals. I love stores with giant aquariums. Out here the Fry's in San Marcos has a couple of them - awesome. But LL Bean has actual taxidermy - how great is that? The moose here were found locked together like that - they starved to death! 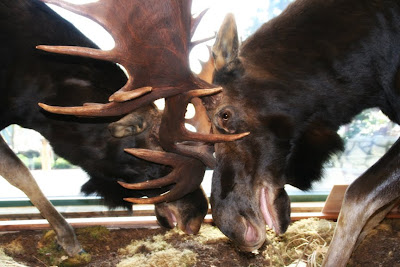 Here's a video that explains: