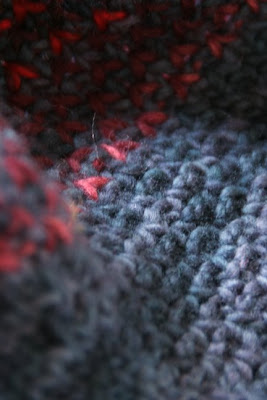 Here's a little progress on my newest knit: Dark Victory from Annie Modesitt's Romantic Hand Knits. The main color is Malabrigo merino worsted in Parisian Nights (hence the name Victoire sur la Nuit - that's Dark Victory in French; I had to google it but now I know and so do you, just in case you're ever walking down a street in, say, Cannes, and somone challenges you to a Bette Davis trivia contest - Voila! You know something.) and the slipstitch contrast color is the Zitron Unikat left over from Mary's Tomten.

I'm sort of following the pattern, at least in principal, and changing stuff when I feel like it. We'll just see how that works. I am very happy with how quickly it's going, though - I cast on on Sunday afternoon and here it is Thursday, almost done with the body. I love love love the Malabrigo, so it's hard to put down, plus I had a little cold this week and it drizzled a bit yesterday, making for the best knitting day I've had in a long time. I watched The Great Debaters and Notes on a Scandal, both of which were good (especially Notes - remind me never to cross Judy Dench, who's scary as heck in this movie) and a couple of other movies I can't even remember the names of, so I guess I can't recommend them!
Posted by Windansea at 3:02 PM