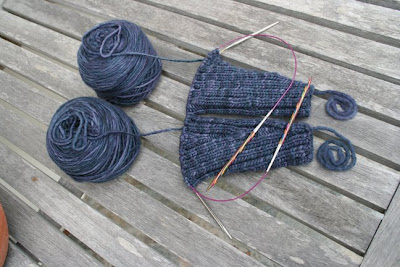 Sometimes my laziness causes me to work much harder finding a work-around solution than I would've worked if I had just bitten the bullet. I kept reading the directions for Dark Victory over and over again, trying to figure out why I'd have to knit the sleeves flat. After all, the body is knitted in the round, and then there's a raglan yoke at the top - why would I want to seam sleeves when the whole shebang is going onto the same needle as soon as they're done?

But knitting the sleeves in the round presented another set of problems: I have to warn you, if you decide to knit Dark Victory - read the errata carefully, and trust yourself. Don't trust the math in the pattern - it doesn't always add up. So in converting the pattern to knit in the round, I knew that the increases (which have to be done while maintaining the rib pattern) were going to be wonky, and no amount of note-taking was going to ensure ending up with identical sleeves.

My solution? Learn that whole two-socks-on-two-circulars technique and do the dadgum sleeves in the same way. I read the tutorials, I watched a couple of shaky Quicktime videos, and cast on. After the initial craziness (At one point John asked if Snoopy had "helped" with my knitting!) I got it sorted out and now I'm whipping out both sleeves at once pretty well. I'd tried to understand this technique some time ago but this time it clicked - once I finally figured out that you're always knitting with both points of the SAME needle at any given time. That's key. 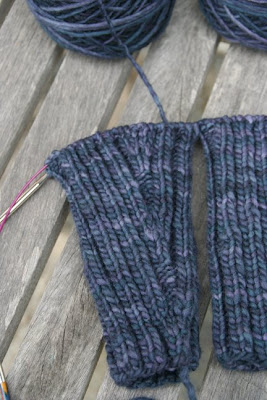 You can see above that I'm winging the increases. Every fourth row, I'm adding two stitches by either KFB or PFB, depending on where the increase is landing. When I've added four stitches, I start a new rib. It's not as elegant as I'd like, but it's going on the inside of a sleeve destined to be stored on the floor of a dorm room, so big deal.
Posted by Windansea at 9:20 AM

I love your blog Lydia! There is a regular group of them that my office reads daily (mostly former coworkers and friends) and for the most part they are soooooooo self-absorbed or just plain insane. Yours is always so well balanced between fun knitting projects (that I could never attempt), highlights of your family, and cool little snippets of everything else!

Well, I am impressed! I'm not nearly far enough along with my knitting skills to have figured out how to do that. I really would like to learn that circ method for socks some day, though. I need to take the time to sit down, watch the videos, and just go for it.

Hmm, I could have sworn I commented on this post earlier today ...

I just wanted to say that the sweater looks beautiful. I too am struggling with increases in ribbing right now ... is there an official "right" way?

I totally get the laziness/stubbornness thing ... I could have done all the seams in the time I've been knitting and frogging the sweater I'm working on, but I won't give in!

These look great! I love your idea to both at the same time to avoid a mismatch. Also it makes more sense to knit these in the round rather then flat.

Looks like you've got it all figured out to me. Good work!