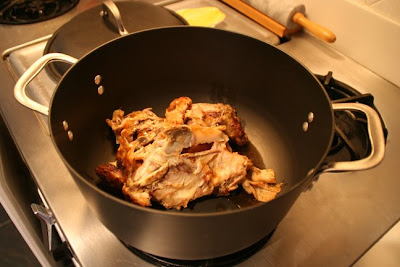 Stock, Step 1: Two leftover chicken carcasses in a big pot
Ravelry has changed not only the way I knit, but also the way I cook. I love cookbooks and cooking shows, cooking gadgets, cooking stores, you name it. I love good markets, nice cookware, and sharp knives. I joined a group on Ravelry, I think it's Knit. Hook. Cook. or something like that, and while I don't really read a lot of the threads or contribute much, I did like the thread about cooking blogs.

As a result, I've subscribed to a bunch of new blogs (you can see which ones over on the right where it says " 'cuz I roll like that" that have inspired me to try a few things. I like seeing pictures of people's kitchens with ingredients all around, and pretty photos of the final product. 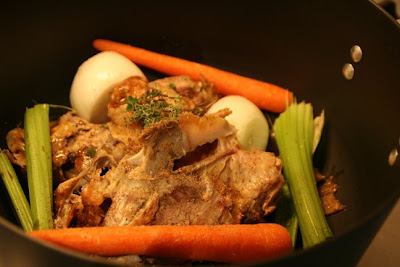 Stock, Step 2: Onion, Celery, Carrot, Herbs: whatever you've got (this is fresh thyme, but you can use whatever you like - tarragon, bay, rosemary, whatever), thrown into the pot, not even chopped, and salt (how much depends on how salty the cooked chicken was - up to a tablespoon or so. Here it's just about a teaspoon cuz I can always add more later.) & pepper
From over at Pioneer Woman, I tried the recipe for the mystery rolls - they're good. So good I promptly wrapped them up after trying one and took them to somebody else's house for safekeeping. I don't know about you, but for me, blue cheese + butter + biscuits = something I can't eat just one of. I also tried the homemade ranch dressing yesterday, which was delish; I used fresh organic dill and homegrown chives and used it on a plain salad of romaine lettuce. Everyone loved it, especially John, who until yesterday was pretty convinced humans had lost the ability to make ranch dressing and only ranch-dressing robot manufacturers could do it. 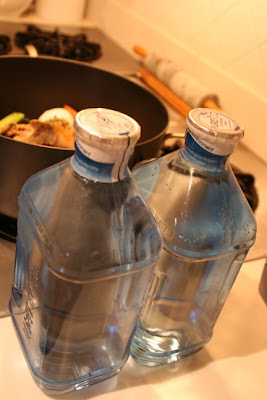 Stock, Step 3: Add water to cover - I use bottled because Windanseaville water tastes like salty rocks of chlorine and probably grows scales on the insides of the unsuspecting public.
Along with the salad, I served up some roast chicken courtesy of Whole Foods - I love their roast chicken, which tastes more like the chicken I make myself than most. Store-bought cooked chicken tastes like brine to me and summons the mental image of somebody whose sole job it is to inject saltwater into chickens, but the Whole Foods kind just tastes like good chicken roasted at home. I usually buy two, carve them up at the same time, use one for dinner the day I buy it and use the rest as another ingredient later in the week. After dinner, I use both carcasses for stock - fast, homemade stock, easiest thing in the world. 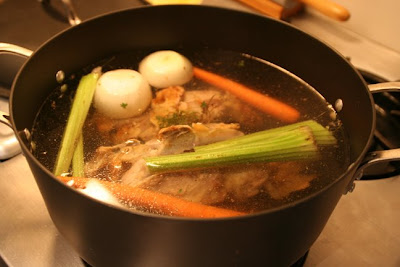 Stock, Step 4 & 5: Bring it all to a boil, reduce heat to simmer, cover it and let it go for an hour or so. Longer is okay if you forget and will even make heartier, more authentic stock, but I'm lazy and impatient and it all works fine for me after an hour. Let it cool a little, strain it into a container and refrigerate. You can skim the fat off later if you want. Or, if it's now 10 pm and you want to go to bed, put the whole shmear in the fridge and strain it manana, or in two days, before you use it. Whatever - you get points for making your own and I for one wouldn't do it at all if it got too difficult.
I also made some blueberry buckle from this recipe because I was afraid Anna wouldn't be able to eat dinner (Poor Anna had to get a second course of braces on her teeth yesterday and now she can't eat anything harder than a milkshake.) and I wanted something yummy and tender. This was so delicious! The kids ate two servings, they loved it so - even Fiona, who isn't into dessert much. But a little ice cream on warm berry buckle - what could be better? 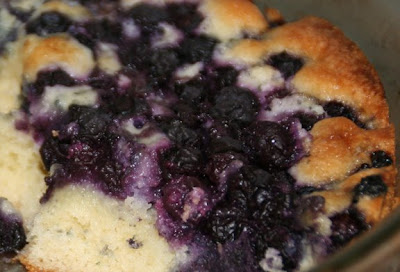 Buckle up!
Today I'm home alone because my family went to Disneyland without me (my choice). My in-laws are into antique cars, and they're riding one of the cars down Main Street in a parade with the kids as passengers (Yes, I passed that up. Crowds, heat, lines, yechhh.) In my fridge, I have the usual plethora of milk. In my alternate reality, the life I imagine, my children drink milk and floss and never throw their clothes on the floor, but in real life, I always have too much milk and you're free to form your own conclusions about the flossing and the clothes. I have a milkman, which is one of the coolest things about living in Windanseaville, and every Monday at about 8:15 he rings the doorbell and leaves me two half-gallons of organic milk, a dozen eggs, and two pints of half-and-half (aka "elixir of life"). We really only need about one half-gallon of milk, but I worry that the milkman won't be able to pay for gas if I cut back on my order, so it's like a subsidy.

Anyway, I used a portion of the plethora to make fresh ricotta cheese today. Did you even know you could do this? I'm sure Italian readers across the globe are shaking their heads at my ignorance, but I had no idea. I took a gallon of milk, heated it to about 200F in a big pot on the stove (I even used my candy thermometer!) and then added 1/4 cup of lemon juice. Voila - ricotta cheese. Really. You do have to strain it, but now I have this much ricotta cheese: 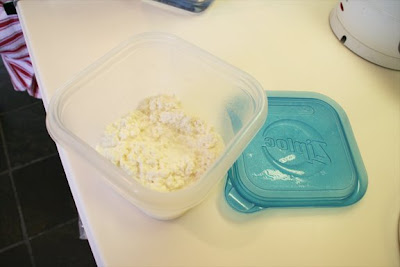 It's not a lot, but it's delicious and has a faint lemony fragrance. After making it, I read up on ricotta cheese. You can also make it with a gallon of milk and a quart of buttermilk (which I now have since I needed it for the ranch dressing). I may try that tomorrow.
Posted by Windansea at 11:49 AM

I had an Italian mother-in-law for years, and I never knew you could make your own ricotta. Of course, she was a little stingy about revealing her culinary secrets. ;-) I am so glad to learn that!

Everything looks scrumptious. I'll have to check out that ravelry group.

You made me laugh out loud and feel very hungry at the same time. It's after 3am here so I should be doing neither. Your water and briny chicken descriptions were priceless :)

Ha, renna, you should tell your MIL you made fresh ricotta so you could stuff your own ravioli!

lisa - are you the lisa I know, like in person and all? LOL! I am the biggest shortcut taker of all time!!!!

I also wanted to come back and thank you for the comment on my blog's Recipe Box Swap post. I've used a number of PW's recipes, always with great success. :-)

Posting out of order here (hope that's not ticket-able) but I just want to say, your cooking ventures are very impressive, I am jealous of you having a milkman (we can't keep up with the milk-drinking in this house!) and your daughters are beautiful. I was about five posts behind, and it has been such fun catching up!

omg, we are so trying that ricotta cheese recipe! My fiance can't wait. Who knew you could make your own!