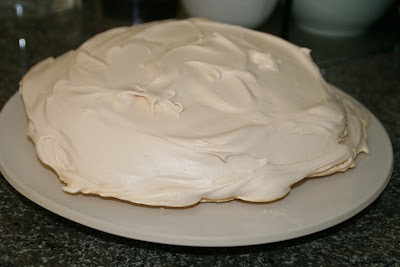 Yes, we're going back to the kitchen. Gas is depressing, sleeves are progressing, and unless you want to look over my shoulder and see what I'm working on at my computer (hint: it's this time of year again), the kitchen is our blog fodder.

So first, above you see what I did with the egg whites left over from the brick of bread pudding. It's a Pavlova. Did you know this recipe is from Australia (or possibly New Zealand)? It's like lemon meringue pie, except without the lemon, the pie crust, or the consistency. It's kind of hard and crackly on the top and gooey on the inside, and we served it with fresh raspberries and unsweetened whipped cream. The tart berries and bland whipped cream are a nice backdrop for the sweet meringue. Everyone loved it, and it was pretty to look at. 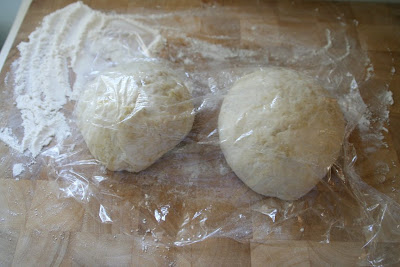 On Thursday I got a wild hair to make my own pizza after seeing this recipe. I'm not sure the dough was particularly successful...I think the yeast might've been older than Mary. You can see for yourself that my pizza doesn't look anything like the one at Smitten Kitchen, but again, the Windansea 5 thought it was delicious and I'm inspired and determined to try again. 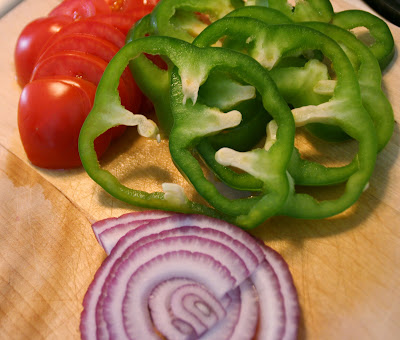 Here's something interesting: I went over to look at the "dealbreaker" recipe poll over here. Yeast is one of the things that usually makes me stay away from a recipe. Also dissolving gelatin, deep frying, recipes that call for making yet another recipe within them, and anything that says "hard ball stage". But you know, I do have a mixer with a dough hook, and then I read about how bread shouldn't intimidate you because people have been making bread without any equipment other than their hands and a fire for millennia. 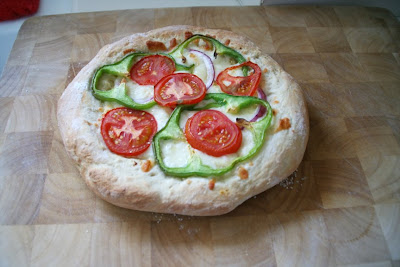 And see, I have these fantasies sometimes about time travel (Yes, that's an innermost thought there, and now you all think I'm crazy, but if you know me in person, I'm pretty sure you'll still tolerate me, and if you don't know me in person, well, then I guess I just became another nut on teh internets.) I imagine that I'm somehow transported back several centuries - how would I survive? What do I know how to do that isn't dependent on technology? Will knitting be enough to ensure my survival, given that I don't know how to spin? Or will I be burned as a witch the minute I say, "Let's google it!"?

Anyway, getting back to dealbreakers...I was thinking about techniques in knitting that will make me walk away from a pattern. Like, say, giant expanses of stockinette on tiny needles. So far, steeking. Cables with vast fields of purling in between. In some cases, if I really love the pattern, I'll bite the bullet. But in most cases, it just isn't worth the effort to me; there are plenty of great patterns and designs that are fun to knit and don't involve swaths of timesucking stitchery. What is it for you? Hemming? I-cord borders? K3tog?
Posted by Windansea at 9:24 AM

Anyone who saw the simple things I knit on a regular basis (lots and lots of baby hats, mostly, and other small stuff) would think I'm simply an inexperienced knitter yet. And they'd be right to a point; but my projects remain simple for the most part because I'm a lazy knitter. If the pattern is going to turn my brain to mush trying to figure it out, or if, like you mentioned, I'm going to spend hours and hours knitting tiny little stockinette stitches, I'd as soon have a tooth pulled, and I hate going to the dentist!

I have my mom's cast-off bread machine, which I've discovered to be the simplest means of making pizza for me. I toss in the necessary ingredients and punch in the dough setting. When it beeps, I plop the ball of dough onto the counter, quickly moosh it out into a lopsided circle with my hands (I'm spherically challenged), top it with my prepared ingredients, bake, and eat! :-)

This may or may not reassure you, but my husband and I occasionally speculate how we'd do if transported back in time. He's an electrician, which (depending on the century) would likely get him burned, but he could probably translate his skills fairly well and become a metalworker/inventor (which I guess most of us could do, given that we have seen the future, although I admit that's totally cheating!) I, on the other hand, would probably have a harder time; I do know how to spin (on a drop spindle), but I'm sure I don't knit fast enough to be useful as a source of clothing. I'd definitely have to kick it up a few notches.

And I'd probably have to figure out i-cord. I know the "i" stands for "idiot", but I totally can't figure it out!! And APPLIED i-cord?? Give me P3togTBL instead any day!

P3togTBL--I will skip the whole pattern if it has to be done more than a couple of times!
Oh, yes--hemming! I used to sew a lot, and always took it my Mom for the hems. She does such beautiful tiny stitches, and I make mine an inch long if I can get away with it. Or two inches.
I'm old enough to have been a "hippie" in my youth, so bread and cooking from scratch is not beyond me. Guess I need to learn to spin after all! I would need some way to earn what it takes to buy food. I can turn out simple sweaters and blankets with my knitting needles with decent speed.

My problem would be that I hate being hot and can't sleep when I'm cold. I would have to have my heat pump!!!

I was knitting up a sock while my daughter was at fencing lessons yesterday - and that's when I met your daughter! We started with knitting and then moved to blogging! Happy to peek in on someone local - you know, who's shares the same gas prices, water delivery companies and yarn stores!!