No Love for the Glove 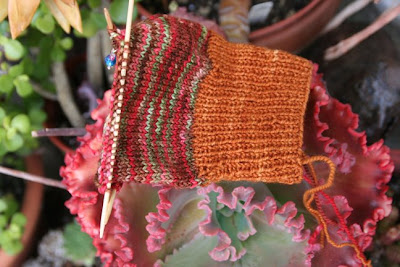 Dear readers, the progress shots of my apple-pie gloves in today's post are a blatant lie and a sad disappointment.  Gauge bit me again. I know, I know, I never learn. But honestly, for something so small, doesn't it seem like by the time you knit a swatch, it would be half a glove anyway? Isn't it better just to plunge right in while you're enthusiastic about the new project? 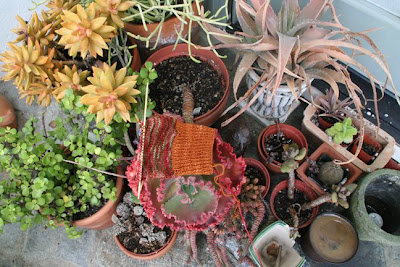 Take a good look, because now it's a pile of kinky little Koigu.
So anyway, the glove above was knit to the point where you put the thumb gusset on spare thread, at which point I put it on my hand and discovered it might fit John, like if he gained ten pounds just in the hands. I frogged the whole misbegotten thing and started over, got back to the mid-thumb and then cast on for something else. The glove is now my porta-project, awaiting trips to the orthodontist and what-have-you.
Posted by Windansea at 7:40 AM

I can empathize with you. I have the same thoughts regarding gauge swatches. I'd rather take my chance that spend the time I could have half-finished a project!

I think the color choices worked really well together! Hopefully it works out better this time.

I do that alot with hats. I ususally just go up a needle size, and see what happens. I do like the color.

I don't swatch on something that small either. The start of the project itself is the swatch. Too bad it didn't work out the first time though.

Ha - see that, I knew I wasn't alone. Why swatch such small knitting?

Don't swatch for gloves, I say! Just try it till you get it right.