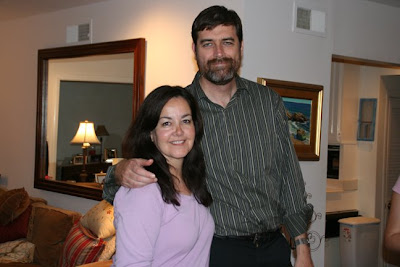 Okay - no makeup, and no retouching. Pretty damn good, I say!
Wednesday was my 20th anniversary. Yes, 20th. I know, I don't look like I could possible be that old, or that I could, as of today, have an ADULT CHILD. That's right, Fiona turns 18 today, making me the parent of AN ADULT. I just want to know if that means I have to figure out what I'm going to be when I grow up, because I don't think I'm ready to make that decision quite yet. 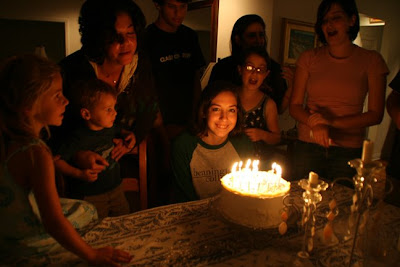 Anyway, John and I went out to dinner on Wednesday by ourselves and had a lovely time, and then on Thursday night we had a party at our house to celebrate our anniversary, Fiona's family birthday party, and my little nephew Charlie's family birthday. Fiona and Charlie share a birthday - isn't that cute? He's two years old today. 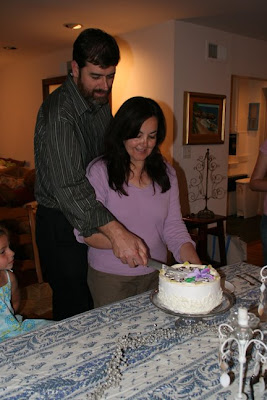 We ordered the same cake from the French Gourmet that was served at our wedding and let the kids blow out some candles, and then John and I had a wedding flashback, cutting the cake and taking a nibble. I'll just say that 20 years later I'm still happy to be married to John - he's the best - and 20 years ago he could've been feeding me sawdust because I believe I spent my entire wedding day having an out-of-body experience.
Posted by Windansea at 7:08 AM

Congratulations! You really do look great to have an adult child, and to have been married for 20 years! :-)

Congratulations! You both look wonderful!

You are looking especially pretty in that photo! It must be all of that happiness. Great husband and children and perfect, youthful skin. Even with an adult child :)

I say that you don't have to decide what you want to be. Ever. It should change every day, just like me. I'm a knitwear designer today. LOL

Congratulations to all of you. You dont look as though you should have an adult child, you look very youthful.

Congratulations! Wishing you many more happy years together.