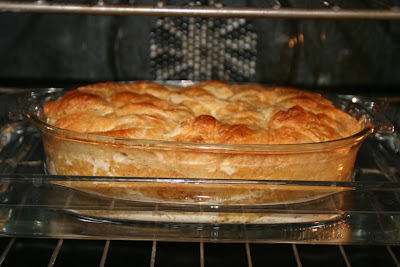 My sleeves, they progress. Not much to see there, except they are indeed getting longer.

However, I do have exciting knitting news. My LYS, the very fabulous Knitting in La Jolla, is stocking Malabrigo! Suzanne ordered merino worsted, lace, and silky wool - so now I can pretty much live my entire life within a two-mile radius, thus saving gas and, hence, the planet. Yay! I was going to hold off on posting this until after I had time to buy everything I needed and let the rest of you local gals pick over my leavings, but hey. I'm a generous soul. Make sure you leave me some of that silky wool.

In the meantime, the kitchen continues to beckon. I had some leftover croissants from a breakfast meeting and remembered that I had seen Ina Garten make this croissant bread pudding that looked pretty good. I love bread pudding and I had the ubiquitous dairy products and eggs on hand, so I whipped a batch up, leaving out the raisins of death (John has a bunch of food allergies, and raisins and other dried fruits are out - it's the sulphites or something. If I dried grapes myself he could probably eat them, but that's a marital issue that's probably pretty low on his list of priorities.). 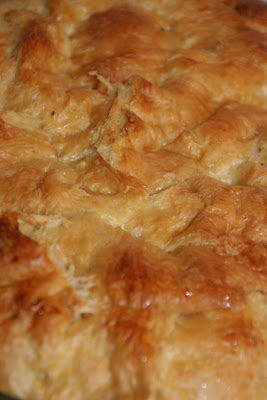 The finished bread pudding looked so good - and then I dished a serving out, which is when everyone let me know that apparently I am the only bread-pudding lover in my family. Did I mention that I try to avoid carbs unless they are fantastic, superlative carbs involving anything bruleed, coffee ice cream, or a great deal of chocolate, in which case, life is short?

And truth be told, it was a little bland. If I ever make it again, I'll add some grated orange or lemon rind and more cinnamon and nutmeg, and maybe some granulated sugar on top to make a crust...or maybe I just won't ever make it again. 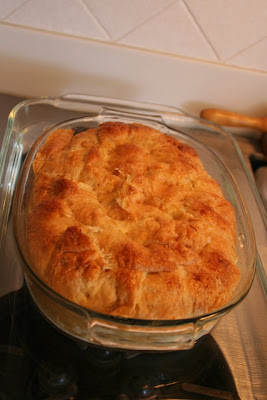 This morning, determined not to throw out the whole 10-pound brick of bread pudding that nobody would eat, I had a brilliant idea. Bread pudding is a little like French toast, no? So I heated up some butter in a medium-hot skillet, spooned a serving into the pan and smashed it flat with a spatula. Then I sprinkled a little sugar and cinnamon onto it, waited till it was sizzling on the bottom, flipped it, sizzled, flipped it again, and put it on a plate. The sugar and cinnamon made a nice crackly crust, and then with a little maple syrup drizzled onto it, divinity. And success. The girls thought it was fantastic.

And I did take pictures of what I did with all those leftover eggwhites - but that's a story for another day.
Posted by Windansea at 3:49 PM

mmmmmmmmm I *love* bread pudding! I have to beg my friend Steven to make it for me ;) He hates making it but it makes me soooo happy!

What a brilliant solution to avoid waste! :-)

OMG that sounds like HEAVEN! I love bread pudding but hate raisins. Yours sounds absolutely perfect. And I love French toast! Can I come live at your house?