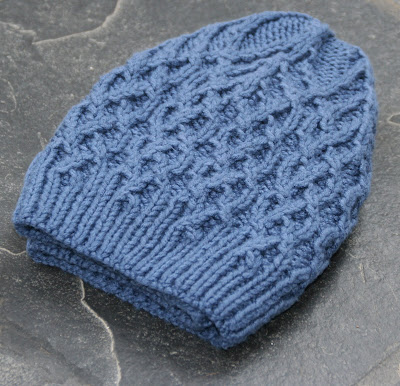 Even after the shrinkage, the shedir is a little too big. Maybe if it's worn with the brim folded up a little...maybe...it might work. And just look at it, lying there all innocent-like.

I did love, however, knitting with Calmer - it's awesome. The hat, even after washing & drying pretty roughly, feels like the knees of your favorite jeans. It's soft and velvety, and the yarn has a little elasticity, so it should knit to fit unless you're a gaugiot (that's gauge-idiot, i.e. someone like me).

Speaking of Calmer, I was down at The Grove last week, browsing (There isn't a ton of yarn there, but what they have is good quality and they have a multitude of cool stuff for ribbon embroidery, books, cards, and assorted other inspirations; plus it's across from Rebecca's) - they had an unbanded ball they let me have for practically free. It's sort of a light lavender so maybe it'll be a shedir for Mary. (Which will probably fit John if I haven't learned my lesson, and I guess he can wear it to the Gay Pride Parade and people will wonder just what kind of marriage we have, exactly. Not that there's anything wrong with that.)

And today, even more Calmer. A brickish red, bought at Knitting in La Jolla (my LYS, lucky me) along with size 1 addi turbos to start that new shedir. I'm a little afraid of the addis for this yarn - it's kind of slippy. John suggested surfboard wax, or possibly a little steel wool action, to which I said, "Yeah, no." I'll just try to be a little more careful. 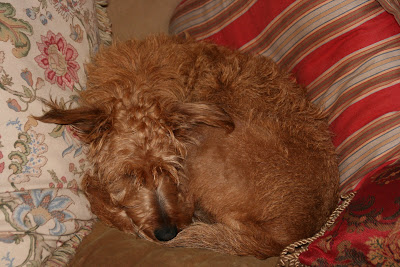 Clearly, Patty believes in being Calmer herself.
Posted by Windansea at 4:03 PM

Surfboard wax---I don't even know what it is, but if it's anything like ski wax -- funny idea. How about bamboo needles? They are harder to find in the small sizes, but they are out there. I'm a loose knitter, too, so understand the slip sliding away of some yarn on Turbos. Shedir looks great, anyway.

My gosh, what a cutie Patty is! And I for one absolutely adore your Shedir - it certainly doesn't look as if it'd be too big! And the yarn?! Yummy, absolutely - it looks every bit as soft and cozy as you described it!

ohh, the way you described the calmer made me feel like curling up with a nice blanket--even though it's 80 degrees here! I just might have to check out some of that yarn. that's too bad that it's a bit big but like you said, it can be folded up. nothing wrong with that. I would love to see a pic of john in a lavender shedir for pride! lol.

Hi mary lou, now that I've cast on it's been okay using the Addis - turns out they were a size 2 mismarked as a size 1, and it's all working out! Lydia

Thanks dipsy - my niece is wearing it even if it is too big - it's still sooo soft. Also, Patty says thank you! Lydia

Hi g-girl, I know, isn't this weather something? Sort of hard to knit, but we still do it, huh? Lydia