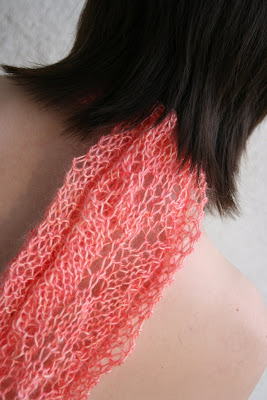 Holy cow, it's been almost a week since my last post! Lest you think I haven't been knitting, I most certainly have. It's just that I don't have anything newly finished to show, so I had to drag the salmon-colored scarf out just for this post. If you're curious, it's the ostrich plume lace pattern flanked by some garter stitch on either side.

When I first posted a picture of this scarf being blocked, Harriet asked for an ultra easy lace pattern to get over lacephobia. I think I'd have to recommend a feather and fan pattern - that was my first lace; I made Misty Garden out of Scarf Style but any feather and fan will teach the yarn over, K2tog type of rhythm that makes up a lot of lace patterns. Also, Branching Out - a lot of people knit it as their first project. Here's mine from last year some time. 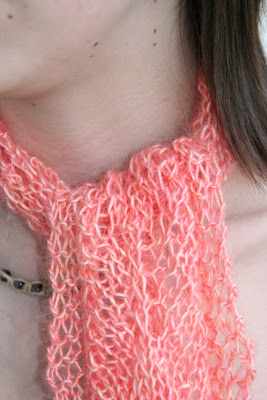 Let's see, what else is new.....Okay, here's something. Wednesday night I shaved my niece's head, because something happened that we weren't expecting, being new to the whole cancer thing: her hair actually hurt when it started falling out. You know the feeling of having a really tight pony tail all day, and then when you take the elastic out your hair kind of hurts? That's what it felt like. It bugged big-time, so she elected just to get it shaved off.

I used the clippers John trims his beard with set to the shallowest setting, and while my sisters drank wine I took my niece on a hair tour of the 80s & 90s, going from Flock of Seagulls to Bow Wow Wow to GI Jane. And in a turn of events that I guess isn't all that shocking considering the source, we now find that Britney's been totally scamming her personal style. Although to my knowledge my niece has no tatoos and also wears panties.

Then Thursday we went up to the Cancer Center and had her PICC line inserted - and guess what? The nurses were super impressed with the PICC cozy. So, all you knitters out there - knit a PICC cozy and donate it to your nearest oncology ward. They'll appreciate the heck out of it.

Friday was round two of chemo, which for me translates to a lot of knitting time. Not only that, but I got to teach someone else a new skill - my sister, who, like me, learned how to knit the way all my Spanish relatives knit, with a long needle tucked under her right arm, wanted to learn how to knit in the round so she could make a PICC cozy too.

I set her up with a baby hat to start with - easier on a 16" round than a bunch of double pointed needles, I think. Today she had about 4" of hat done, and she'll be ready to switch to the dpns tomorrow. And once she learns that, the knitting world will be her oyster. 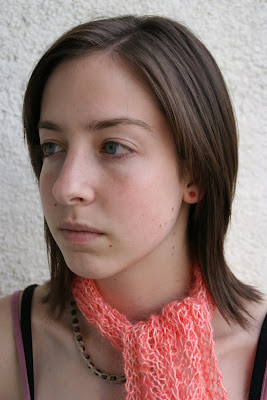 Today we knit on the beach...what a glorious day it was, warm and sunny. And Fiona got her hair cut - very chic, don't you think?
Posted by Windansea at 8:47 PM

chic indeed! you forgot that your niece is still in her right mind whereas britney lost hers years ago! lol. that's great that the nurses loved your niece's picc cozy. :) and awesome that your sister wants to try her hand @ some knitting in the round!

I would be honored to make a picc cosy, if only I knew what it is. Do you have a parren that you could share?
Tami T in CT
c21tamit@hotmail.com