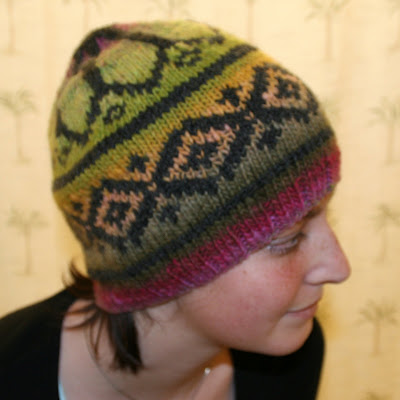 I was inspired by g-girl's recent blog posts about what's on her needles (although - yo, where are the pictures? You'll have to be satisfied with her travelling vines scarf, I guess!) to turn the frogged scarf of underestimation & shame into a Fake Isle Hat). It's a great pattern, although again - my gigantic knitting probably warranted sharper decreases at the top. Hmmmm...what to do with the rest of the Noro, though...perhaps some Fake Isle mittens. 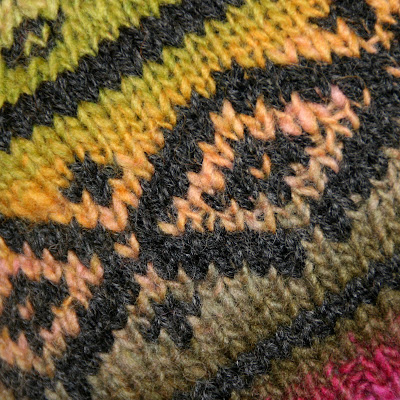 I do have another FO to post about, a cable knit hat of my own design, but I have to wait for the girls to get home later so I can stick it on someone's had and snap a photo. I haven't figured out how to take a picture of my own head very well yet, a skill a lot of other knitters have mastered.

In a completely different vein (that has absolutely nothing to do with knitting) I saw this article that appealed to my love of all "when worlds collide"-type tales about Jose the Beaver (I kid you not, his name's Jose, despite the fact that, estoy pretty segura, he's not Hispanic! El coyote, si, Hispanic. The beaver, not so much.) in New York. He's the first beaver to appear in NYC in 200 years! I like how the biologist says he's sure people will see more and more beavers now....I guess Jose's texting them. 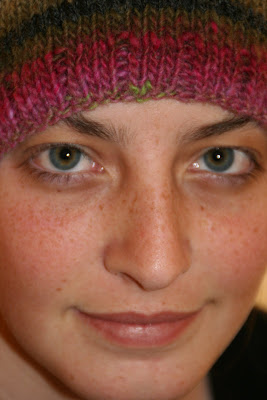 I wonder why Anna always looks so amused in one of my hats?
Posted by Windansea at 1:39 PM

lol. jose's texting the other beavers to come to ny?? i love that he's a jose..i'll have to tell my fiance (also a jose!).
oh, i'm supposed to be commenting on your fake isle hat. it looks amazing!! as for pics of mine, didn't I provide a link in that post? hm, guess not. there will be one today, i promise. :)

Wow, your hat is lovely! I can't keep up with all your great knits!!

Great way to use that yarn... it's neat to see a scarf morph into a hat right before your eyes. Cool pattern and those colors look great together.

hey g-girl - my dad's a jose too, pretty funny. And I went to see your fake isle, awesome! Lydia

Hi queen, i'm big on quick projects - it's that knitting ADD I have. Lydia

Thanks moi, I feel better now that it's *something*. I still have another skein, though - I'm thinking about that one. Lydia

Now, that's the perfect Fake Isle Hat as I see it - very, very beautiful, and you've knit it up so fast! That was certainly the best way to use that yarn!