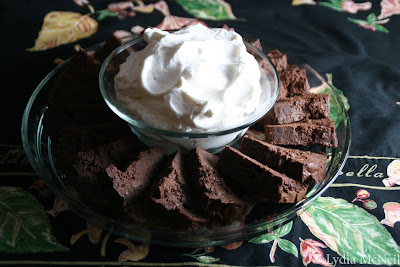 After a couple of weeks' hiatus from TWD we're back with this week's entry, a quickbread using chocolate and bananas as the main components. I love bananas and eat one probably every day, but John is allergic - he can't even touch a banana. A few people on the TWD boards said they were substituting either Greek yogurt or sour cream for the bananas, so that's what I did; I used a cup of sour cream in place of the two bananas called for in the recipe. As a further disclaimer, I believe I undercooked it somewhat because, as usual, I was baking late at night and I just had to go to bed regardless of whether my bread was ready!
After cooling and cutting, I decided it looked pretty dense and needed something to lighten it up, so I thought of whipped cream. Because really, what can't be improved by adding whipped cream? I defy you to name one thing, unless it's something that could be improved by adding bacon fat. Go on. I'll wait over here while you think about it, my non-vegan friends. 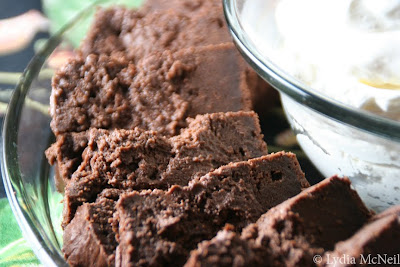 Anyway. I took the bread to my seasonal care-package-for-our-college-girls group where it was very well received, and the whipped cream was an excellent call. Thank you for this week's entry, Steph of Obsessed with Baking!
Posted by Windansea at 6:49 PM

Email ThisBlogThis!Share to TwitterShare to FacebookShare to Pinterest
Labels: baking, Tuesdays with Dorie

Your bread looks delicious. I'm with you on the whipped cream!
Mimi

Thanks for baking along with me. I agree, whipped cream makes everything better

Ooooh, is that why you needed my address? Hahah now I know!

I put whipped cream on mine too. Like the idea of substituting sour cream.

Yeah, it was pretty good with the whipped cream! Noni, you're not getting any of this in your care package, but you *might* be getting something else in the mail, heh heh!!! Lydia