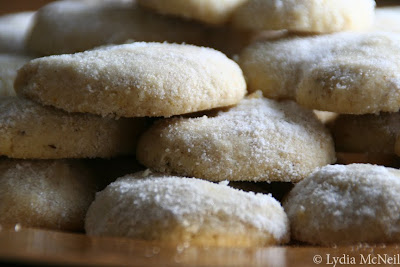 Cardamom Crescents
Here it is, 2010, the Monday after the holiday break. There was so much baking, cooking, knitting, wrapping, decking, and general revelry that I completely forgot to post my Tuesdays with Dorie entry for last week (chocolate cheesecake, which I even baked two weeks ahead because I knew I'd get entangled in the day-to-day) and I haven't taken pictures of any of my knitting. 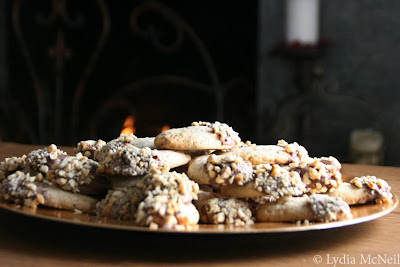 Hazelnut Shortbread Sticks
There were holiday concerts to go to, dinners to host, trees to trim, and movies to watch, and we topped the break off with a trip to see the snow yesterday (more on that to come). Fiona was home so of course we had to see New Moon (a thinly-disguised excuse for a bunch of baby men to take their shirts off, if you ask me) but we also saw Avatar and Up in the Air, both of which were excellent. Plus how amazing is George Clooney? He even manages to be cute in Fantastic Mr. Fox. Coconut-Orange Snowballs
Snoopy turned three on New Year's Day, and even though we didn't throw him a party he marked the day himself by accidentally falling into the pool, which was exciting because he hates the water and completely overreacted and then dried himself off by running under bushes which necessitated a trip to the doggy spa and a second dunking. He's so small, and loves being inside so much, that it was the first time he'd ever gotten dirty with actually dirt. 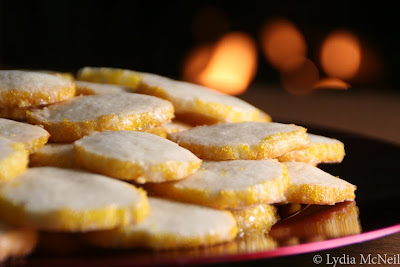 Sablés
Anyway, I thought I'd wrap this post up with a few pictures of my holiday baking. The cookies, well, you've gotta have Christmas cookies. In addition to the sablés, molasses ginger, and chocolate crinkles I've made before, I tried three new recipes as well: coconut, hazelnut shortbread sticks (these were voted the best) and cardamom crescents. I probably won't make the coconut ones again, and although we all liked the cardamom ones, the hazelnut ones were so amazing I'll stick with those. 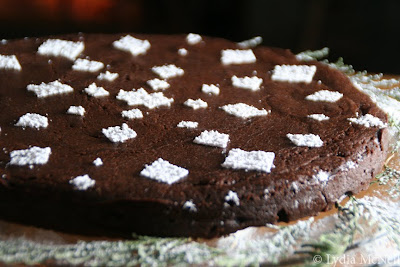 Flourless Chocolate Cake
For dessert after Christmas dinner, I made flourless chocolate cake with warm caramel sauce and a French pear tart so people could choose chocolate or fruit. (Or both. I'm looking at you, Self.) This was the first time I ever made frangipane...so good. The tart proved to be very popular so I will definitely make that again next year and the chocolate cake is a recipe I make often because it's fast and delicious. 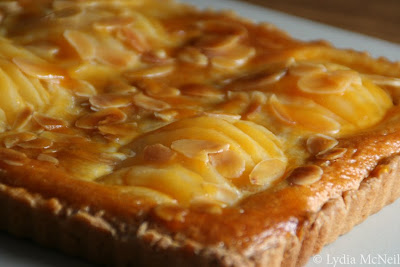 French Pear Tart
And just in case you think we didn't have enough sweets, the leftover caramel sauce became the topping for homemade ice cream on New Year's Eve, forever spoiling me for caramel out of a jar. Happy 2010! 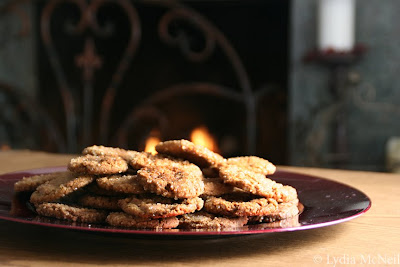 Molasses-Ginger Chewies
Posted by Windansea at 7:57 AM