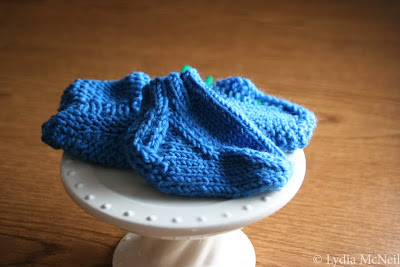 Baby booties, several pairs for homeless teen moms. Cascade superwash, various patterns.
Let's all cheer for a bit of knitting content on my supposedly knitting-centric blog! First, while you peruse some of my ongoing knitting (the tiniest tip of the WIP iceberg, my friends!), a link to some geeky knitting. You know, if my husband wasn't such a big guy I would seriously contemplate knitting him a periodic table sweater, just so I could watch him walk out the door every morning and say, "Wait, you forgot YOUR SWEATER!"
Then there's this one. I read a caption for this photo somewhere that called it the world's biggest bully magnet. Luckily nobody in my house is Mario obsessed so I don't have to commit that particular act of intarsia. And since I wrote this post a couple of days ago there are now a lot of other gaming sweaters making the bloggy rounds if you want to see more. (Edited to add: a Tetris blanket!!!)
In other knitting news, I helped someone cast off yesterday. Fellow knitters, do you remember those days? It's the scariest thing for non-knitters. The cast-on isn't such a big deal - you don't have too much time invested. But after slogging through miles of garter stitch rectangular knitting, screwing it up at the end is an overwhelming prospect. 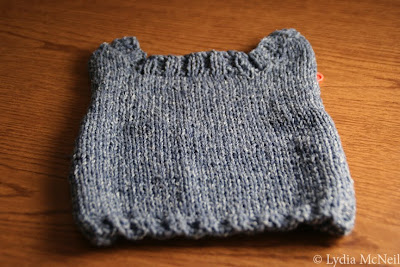 Get Ziggy - the back. Not too Ziggy yet.
Imagine what it was like before you could go here! Seriously, my non-knitting friends, I'm happy to cast on and bind off (and pick up dropped stitches, or tell you why you suddenly have more stitches, or how a hole appeared out of nowhere, or whatever) for you as many times as you'd like. But some of you have expressed embarrassment at having to ask more than once...go to that link. Or go ahead and bring it by - you know I wouldn't tease you if I didn't love you.
Posted by Windansea at 7:58 AM

Oh casting off still gives me some heart-stopping moments and I've been knitting since I was a child in the '50's! I always keep a crochet hook on hand to pick up the inevitable dropped stitches. Currently I'm finishing a cap-sleeved pullover that I started about 5 years ago! It got put away at the bottom of an old knitting bag. Poor thing to be forgotten for so long. It's good to sort out the craft area and rescue those UFOs. Bye for now, Mar,

I totally want a Pac-Man sweater! Not enough to knit one though.

Liked your comment about the geek sweater. Believe it or not, there are two Periodic Table sweaters in our neighbourhood. A chemist friend liked it so much that he borrowed it for months for his MIL to copy. In desperation, I made a PDF chart with x-stitching software, so that I could get the sweater back. :-)

I know, Mar, I've got a few things in the closet that have been on the needles for a reaaaaaalllllllly long time. I ought to get in there and finish up a few instead of casting on more and more! Lydia

Hahahah, Kristyn, I loved Centipede...Kind of wish I had at least a t-shirt. Hm...... Lydia

Avital, that sweater is the bomb. My husband and I met when we were lab partners in freshman chem - really - so I totally appreciate it!!!!! Lydia