The Oven is Hot 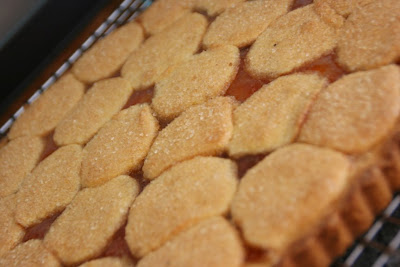 What is wrong with me? I'm going to be putting on a ball dress in less than 10 days and instead of being on my yearly JBD (Jewel Ball Diet) I've been accompanying Mary on a dizzying journey of recipe discovery. I kid you not, we spent an entire morning last week at a restaurant supply store buying a food mill, which Mary had been coveting since watching Tyler Florence and Ina Garten use theirs ("Mommy! You can grind the tomatoes and most of the seeds stay in the top!" Yeah, she's nine. This week she made chocolate ganache and a lemon cornmeal bundt cake, pretty much alone. Some people are born foodies, and some of us develop later in life.) Anyway, in addition to arroz con pollo, honey glazed salmon, spaghetti both bolognese AND carbonara, ad infinitum, the last two weeks have seen a plethora of baked goods, including three of the jam crostatas you see here. Yes, three. 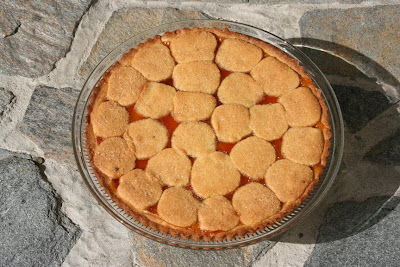 Here are a few of the things we whipped up, with the reviews of the Windansea 5:

Coffehouse Scones - these were okay.
Lemon Cream Scones - a keeper. We have nut and dried fruit allergies here so I left out those additions, but the plain scones were fantastic.
Lemon Cornmeal Bundt - this has its place; it had an earthy crunch and wasn't too sweet. We used blueberries.
Zucchini Bread - we made about 18 muffins from this recipe, which everyone liked.
Easy Jam Tart - this was my favorite find this week. It's easy and every version came out great. The one you see here is apricot, but we especially liked one made with plum preserves - just plums, no sugar added - that we served with homechurned vanilla gelato. Did I mention I've been making gelato?
Better than Pinkberry - Fiona says it is, and to please make it again. I used a combo of Greek and Bulgarian yogurt, and at least it's for sure yogurt, no lawsuit needed.
Chocolate Cream Tart - from Dorie Greenspan's fantastic book. This went out to my sister's house to be served at a dinner party, so we'll have to wait on the review. I added a tiny bit of espresso and a splash of Bacardi to the chocolate cream. 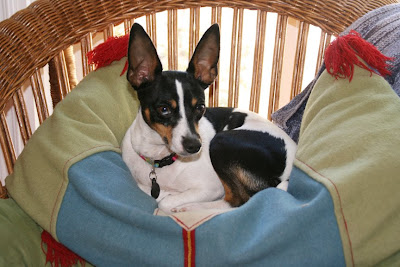 Did I hear a crumb drop?
In knitting news, there's nothing to report. About a week and a half ago, while chiffonading some basil, I narrowly averted slicing the top of my left index finger off with a dull Wusthof and I've been babying it ever since. It's actually all better now, except for the nail being extremely short at the moment. Very attractive, and just in time for my JBM (Jewel Ball Manicure). 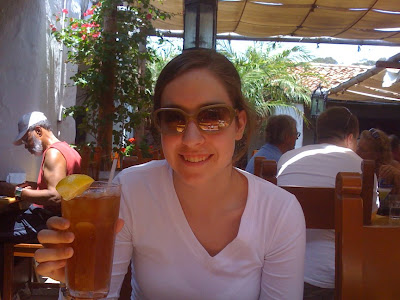 But lest you think I've only been cooking, Fiona, Anna and I did go out to lunch (See? That's eating, not cooking.) last week. I took them to a place they'd never been because I avoid crowds of more than 10 people I don't know personally: what used to be called the Bazaar del Mundo here in Old Town San Diego, but now it's the Plaza del Pasado...I think the restaurant is Casa de Reyes, which used to be Casa de Pico. Amid the tourists, we had a moment of staycation. We were serenaded by the mariachis, and I had a salad. 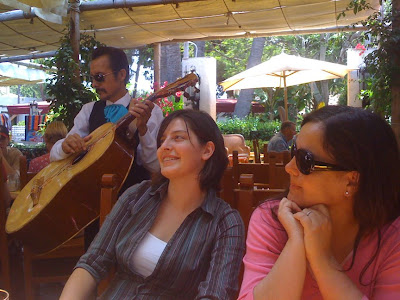 Posted by Windansea at 4:17 PM

Everything looked great. The pooch is utterly adorable!

Mary sounds quite accomplished in the kitchen. It's good that you are encouraging her interest in cooking. You never know what she might do with her talent.

wow, you're living with a future chef. i love it! :) i don't which recipe to try out first now!