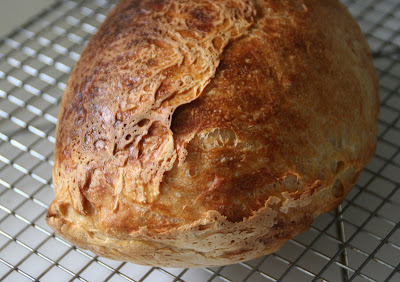 Did I mention that Anna and I went to San Jose this weekend? It's Fencing Summer Nationals, and Anna qualified for Cadets, Div II, and Div III. She flew up for Cadets, lost in the DEs (a heartbreaking 15-14 to a lefty), we flew back up for Div III (another heartbreaking 15-12 this time - they were tied all the way up to 12-12 with about 30 seconds to go in the third 5-minute round and then the girl from ASU took her) and now Div II is on Thursday but we're going to sit that one out. The schedule had her events just too far apart to make one long trip, and we're busy. Plus, it's damn hot in San Jose. Really hot. Thank goodness the Convention Center is air-conditioned, but that doesn't make up for the hundreds of sweaty fencers all decked out in their padded kevlar.

Anyway, we're back. Mary and I spent most of the morning cooking. We started the day with a batch of no-knead bread that we mixed up yesterday to rise overnight. Isn't it pretty? You should've heard it singing when I took it out of the oven. I love this recipe; today I tweaked the method a little by using a silpat instead of floured cloths for the second rise, and that seemed to work fine. The one funny thing was when I poured the dough into the hot Le Creuset casserole off the silpat, it landed on one half of the bottom of the dish and no amount of shaking would spread it out (okay, given - I didn't try very hard since I was shaking a 500 degree hunk of enameled iron), so it baked off like a loaf instead of a round. No problem - so far this recipe is foolproof.

I also have a batch of dough in the fridge from the Artisan Bread in 5 Minutes a Day book. It's more of a sourdough because I'm into the second cycle of making dough in the same container as my last batch without having washed out the remnants, so it's got a starter. I'd show you a loaf of that but I baked one last night and it's gone, and the raw dough isn't much to look at. It's hard to keep fresh homemade bread around in the best of circumstances, but add ballet classes for Fiona, fencing practice for Anna, and growing like a weed for Mary and it's just impossible. 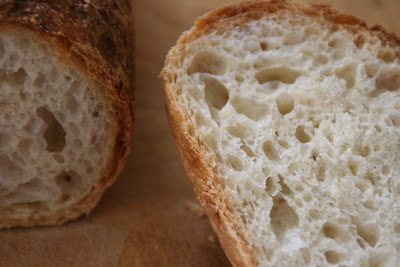 We also have some chicken breasts in the fridge that we pounded flat and have marinating in a little buttermilk for dinner later, and we made a base for blueberry gelato that we'll churn tomorrow. I bought a couple of packages of frozen organic wild blueberries last week to use in a cobbler and they turned out to be shriveled, miserable-looking little things. More like capers than berries, really. We figured gelato would cure anything. I used 3/8 c of 2% milk and 1/8 c of heavy cream, so we'll see how it all turns out.
Posted by Windansea at 12:24 PM

Ahhh ... the heat of San Jose ... and our little non-airconditioned house sits in the middle of it! Thankfully the Marine layer is supposed to cool us off starting tomorrow and should continue thru the weekend. ;) Yummy looking bread - I may have to try it when it cools off enough to actually turn on the oven!

Yummy, We can't keep food in the house either (3 tap dancing boys here).

Yeah, San Jose was baking on Monday. I stayed at my BIL's commuter apartment in Mountain View, which is a nice little town. I love it that the restaurants stay open pretty late!

I'm going to try this bread. Thanks for sharing!