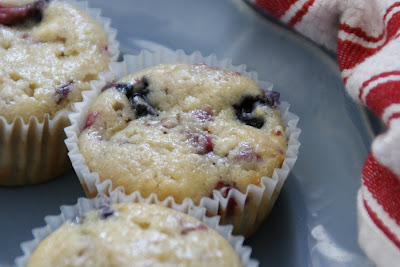 In case you couldn't guess, the theme for today is red, white and blue. We started the morning with ricotta berry muffins, which we took down to a friend's house. This particular friend lives on the Beaumont Street Parade route and happens to be a genuine VIP - she's one of the parade judges - so all the floats stop right in front of her house. The parade consists of homemade floats and scooters & bikes dressed up in bunting, kids waving flags, dogs in red bandannas, etc. There's a band and food at the end of the route and an awards assembly, but mostly it's an excuse to mill around the street and drink a bloody mary (Hey - it's red, and hence patriotic!) before 10 am. 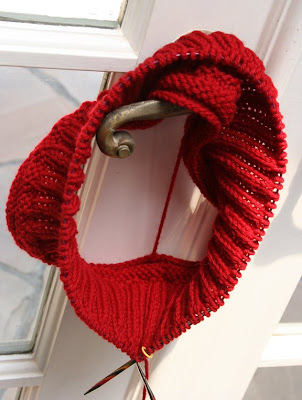 Next we're taking a chocolate cake and hummus over to my sister's for our patriotic 4th of July feast. People, in my family, it's all about the food. It's a good thing there's a holiday in just about every month so we have an excuse to be more over the top than usual. What can I say? We're Spanish. Food = love. I was going to take pictures of the cake and the hummus, but they're not in theme, so you'll just have to use your imagination. I've made the hummus before so I can assure you that it's terrific and easy - minty fresh with a garlic one-two punch at the end; I haven't tasted the cake yet but I made it with Valrhona cocoa so how could it go wrong? The cake recipe is the Texas Sheet Cake version made by Pioneer Woman, although John says it should really be called Nebraska Sheet Cake. It's a geography joke made all the more amusing by the fact that he thinks Nebraska is shaped like a sheet pan, but that's why he's a physicist. 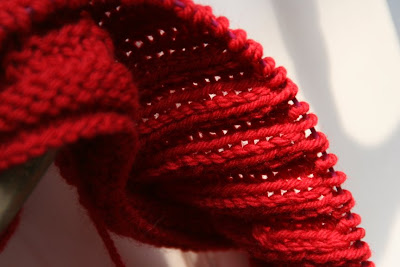 Instead, you can look at the start of my newest knit, a Back to School Vest from Fitted Knits, in red Cascade 220. Because it's in theme.
Posted by Windansea at 1:36 PM

I hope you had a great time at the feast and that the hummus went over well! Glad to know you're enjoying the recipe. :-) I made hummus for the 4th of July here at my house this year, but made the rosemary artichoke version instead. It was a hit!

The red will make a pretty vest.

Those muffins look so yummy!!

Thank you - the red is fabulous but the vest is slow going - lot's of ribbing!

And the muffins were very moist and yummy!