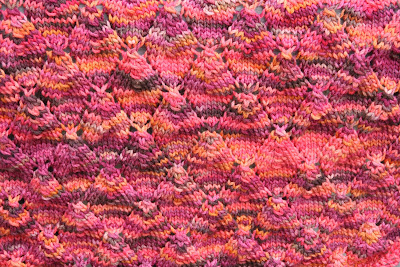 Sometimes the days just get away from me - it's been an entire week since I've posted, but to tell the truth I haven't gotten a lot of knitting in. The world intrudes.

My shawl, despite a few setbacks, is finally done. There it sits in all its unblocked glory. As you know, I ran out of yarn about five rows from the end. When the new shipment of Kersti came I decided there was enough to add those five rows plus an entire pattern repeat. I know, I know... despite dedicating an entire post to never learning, ever the optimist am I. There was enough for the extra pattern repeat, but not for the five rows of garter + bind-off. Tink. Tink. tinktinktinktinktink.

I finally ended up with two rows of garter and bound off using the Russian bind-off you see above. It's accomplished like this: *p2tog, slip the st back onto the left needle, repeat from * to end. 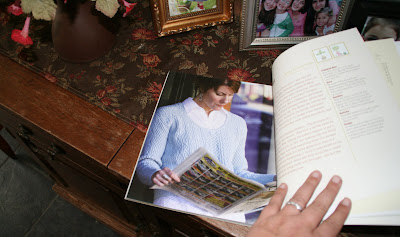 In other knitterly happenings, I was over at Knitting in La Jolla picking up some Cascade superwash for a little somethin-somethin for Snoop, and got distracted by a couple of books - Lace Style, which I promptly added to my "Style" library, and No Sheep for You Actually, Suzanne showed me No Sheep because it has a sweater pattern that is basically the World's Biggest Shedir - 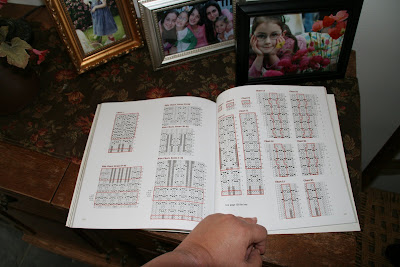 yes, even bigger than my own gigantic one - that has three pages of charts and looks like it might take my natural lifetime to knit!.

Anyway, I've been paging through them all week for inspiration, and yesterday I cast on six stitches: the start of the Tuscany shawl (scroll down for a photo) from No Sheep.

Mary's playhouse continues to progress, but the weird fog we've had (See? La Jolla has weather problems too. And I was going to link to a picture of the fog, but the first hit on google images that really showed it also linked to a naked guy holding some kind of crustacean at Black's Beach, which frankly sounds like a bad idea and wasn't very attractive to view, either. So no photo for you.) has not been conducive to painting. And - horrors - rain is predicted on Wednesday. Maybe later in the week I'll get a shot of the playhouse if the sun cooperates.

And - looky here! Snoop's ears have stood up, making him look like a cross between a fruit bat and a holstein. 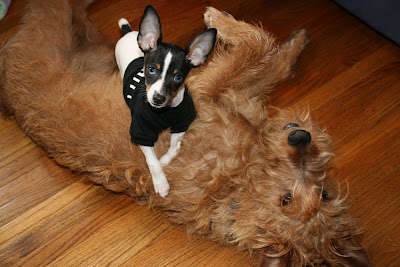 Posted by Windansea at 9:51 AM

The shawl is gorgeous, and the dogs are hilarious!

That shawl is beautiful.

Dogs aren't half bad, either.

My gosh, your little furry ones are *so* cute, what a hilarious pic!
And what a beautiful shawl you did, the pattern is fantastic! Congrats on a really great accomplishment!

I love Snoops ears!! Thank you for the Russian Bind off tip as i have great problems with tight cast offs!

Your dogs are too cute!
The sweater turned out great!

Your dogs are adorable! :-)

somehow I missed this post! I, too, purchased lace style and am trying to wait on getting no sheep for you. you're a bad influence you know (withouth even trying!). your shawl looks great..tuscany is going to be amazing too. ha. snoop does look a bit like a fruit bat!

Ha!! Snoop & Patty say thanks for the props - they are hilarious to be around...I could probably just follow them with a camera all day! Lydia

Hey queen - that bind-off is super stretchy; I'll have to try it on socks now when I get back to knitting. Lydia

Hey g-girl, I really like no sheep, even though I will probably never make that sweater in it. The shawl is fun to knit though - entertaining and yet not too horrible to follow the chart. Lydia

that was one of the patterns I really liked in the book. I also liked eileen. There's a kal if you're interested: http://www.nosheepkal.blogspot.com/