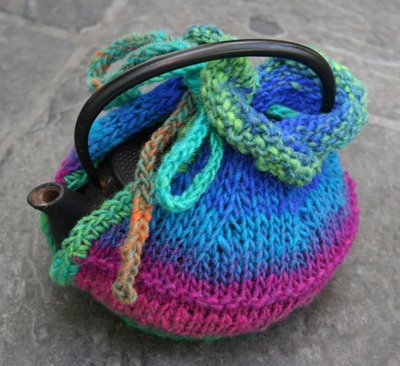 There's nothing DH likes better than his daily pot of gen mai chai from our friends at Cafe Moto. Torrey was kind enough to set him up with an iron Japanese pot and everything, and they even deliver the tea - if you're in the San Diego area (or not - they'll send), you should check them out.

Anyway, I wanted to knit him a cozy to keep his tea piping hot, so I started to knit up the Kureyon tea cozy in Knitty. Lo and behold, right after knitting the really cool bottom (with secret sachet compartment and all - not that DH will ever likely put a sachet in that puppy, especially since the tea is so fragrant) I took a hard look at the teapot and realized the shape was entirely different from the ones the cozy was designed for. 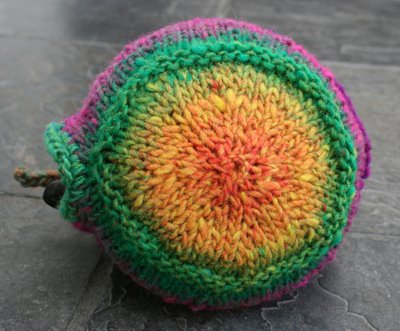 I didn't want to rip it out (I've had a bad enough week along those lines) so I just improvised as I went on, adding sharp increases & decreases for the squashed football shape, and adding a purl ridge where there's seam in the metal on the pot itself. I finished the whole thing up with a crocheted edge along the opening.

If I had to do it over, I'd make it in two halves to gather around the little knob on the lid, but hey - it works, it's cute, and it's super-efficient at keeping even the last drop of tea hot.
Posted by Windansea at 3:47 PM

Email ThisBlogThis!Share to TwitterShare to FacebookShare to Pinterest
Labels: knitting

thanks - can't beat that Kureyon!! Lydia