Casting On, Ripping Out 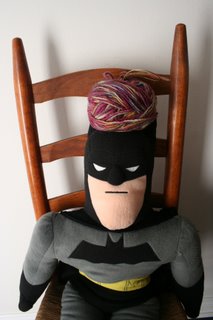 I had the most frustrating knitting day yesterday. I was working on a pair of knucks and decided to knit the textured cuff, which calls for a crab stitch finish. Mine kept coming out more like the crap stitch finish, so now I have a forlorn knuck sitting on my mousepad impaled on a crochet hook.

But we were going to the beach for dinner and I needed something portable, so I quickly printed out the pattern for something I can't talk about because it's a Christmas present for someone who might read this. Okay. I can't even begin to tell you how many times I cast on 8 sts, did a m1k1 round and came out with the wrong number. I ripped that sucker back a good 6/7 times.

Meanwhile, DD#1 decided she wanted to knit a hat for Batman - don't ask. So I had some leftover Manos wool in cool fall colors (leftover from making the Knecklace below - not one of my better endeavors, frankly - check out that one tight row of yarn overs there), 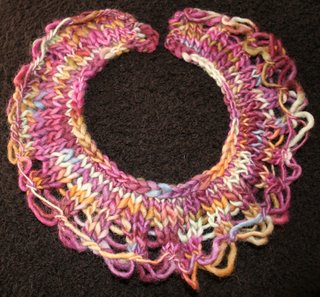 except that she can't cast on by herself. We cast on 88 sts. Knit a row. Decided the guage was too tight. Ripped back, started over. Started again, knitted half a round, came to some kind of craziness in the cast-on edge, ripped back. It's now sitting to the left of my keyboard, where she left it on her way to school this a.m.

Something cool did happen today though - I went to Ulrika's blog and saw that she has a picture of her rendition of the Father/Daughter Hat! That was a thrill - to see someone use one of my patterns.
Posted by Windansea at 7:26 AM

Email ThisBlogThis!Share to TwitterShare to FacebookShare to Pinterest
Labels: knitting