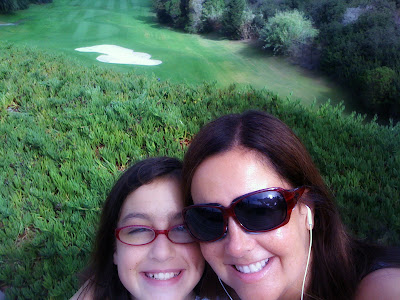 About halfway there. I think Mary was plotting her crepe request here already.
Sunday morning Mary and I decided to walk down the hill to the La Jolla Farmer's Market, in an attempt to get some exercise while it was still cool out while scoping out prospects for Sunday dinner. You know the saying "It's all downhill from here?" Well, that's where I live. It's all downhill from here. I read recently that walking downhill actually has completely different health benefits from walking uphill, which is good, because it kills the calves and is much harder than it appears. 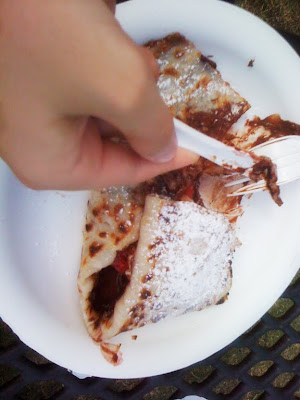 Nutella, we love you!
Upon reaching the Farmer's Market, Mary announced that she was famished so there was nothing left to do but get breakfast instead of shopping for vegetables. There are now two (!) vendors who make crepes, which seems like a lot, doesn't it? Mary ordered a Nutella, strawberry and banana crepe, her fave. I went over and got a lemongrass chicken stirfry despite the early hour. I won't bore you with a picture of mine - imagine zucchini and grilled chicken and that's as exciting as it gets. 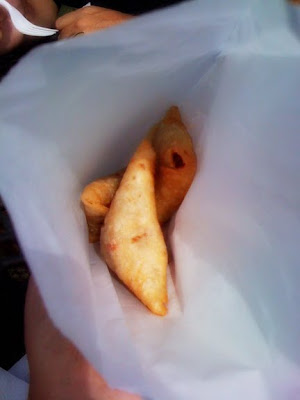 Awesome samosas...say that three times fast.
I did, however, get some of these East African samosas which were killer, I tell ya. The beef samosa was spicy and delicious, very crispy, and the potato was flavored with curry. Awesome samosas. Plus the guy gave me some free ones when I told him I was fully capable of eating a dozen. 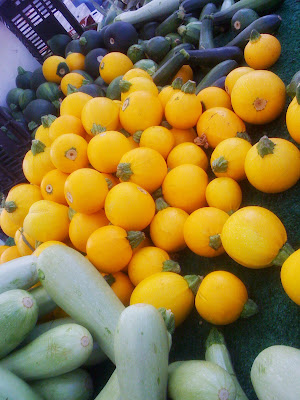 Squash...no pumpkins yet here, thank goodness!
After breakfast we wandered around taking iphone photos of what was being offered up, just cuz some of it was pretty. 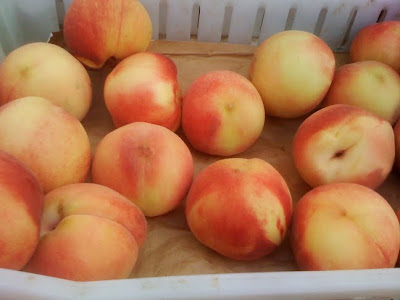 White peaches, which I didn't buy because Fiona is the great consumer of them in our house.
And in case you were wondering, dinner ended up being chicken Milanese (mainly because I wanted to flatten something with a frying pan), a salad of baby greens with herbs and fresh vinaigrette, and some of the bread with caramelized onions they sell at the Farmers' Market too. Some people even had dessert - the cookies & cream cupcakes from Martha Stewart's book...so I got to smash chicken AND whack the life out of 40 Oreos while thinking about Martha Stewart, among other things. I highly recommend it. 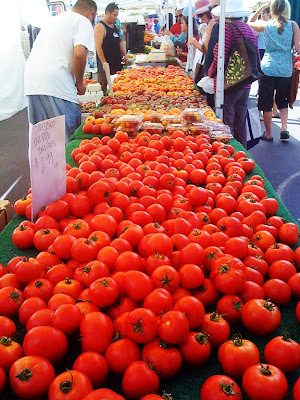 The minute it's not too hot to boil pasta, bring on the tomatoes.
Posted by Windansea at 4:41 PM

It's probably been a month since I've been to the farmers' market. I wish I could walk to mine. ;-) Your pictures are great. It's amazing how wonderful everything looks and smells - so fresh. I'm definitely going next Saturday morning!