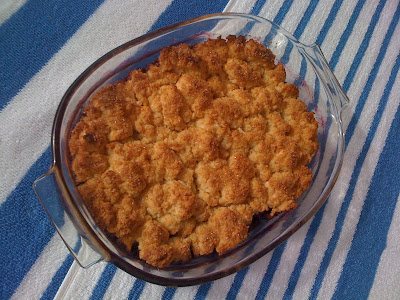 We're heading out in a little while to celebrate the Fourth, but I thought I'd share this beautiful berry cobbler with you first, because right after baseball, hot dogs, apple pie and Chevrolet, what could be more American?
I used Pioneer Woman's recipe as a starting point, but the fresh berries have been so fantastic all on their own that I didn't want to cook them down so instead I used a package of frozen mixed berries and a package of frozen blueberries that I already had in the freezer. If you have a Whole Foods near you, the frozen blueberries are fantastic. I let them defrost and drain, drain, drain before adding the sugar, and then I let them drain a little more because they just had a lot of moisture and while some liquid is good, bubbling hot berry juice can make a huge mess. 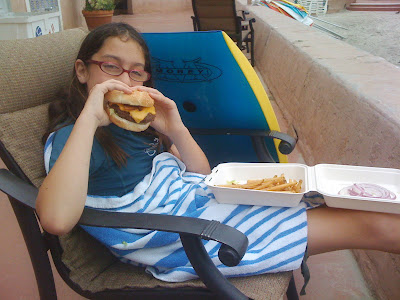 Mary enjoys another American classic - the beach makes you hungry!
I also grated just a tiny bit of nutmeg into the berries and used buttermilk as the liquid in the biscuit dough, and then I sprinkled the whole thing with demerara sugar - assembly was fast, baking was easy, and the cobbler was a hit eaten outside at the beach with a little whipped cream. Along with turkey and roast beef sandwiches on baguettes, cold beer, and a batch of Mary's killer brownies, this was a fantastic 3rd of July prelude to the festivities today.
Posted by Windansea at 7:14 AM