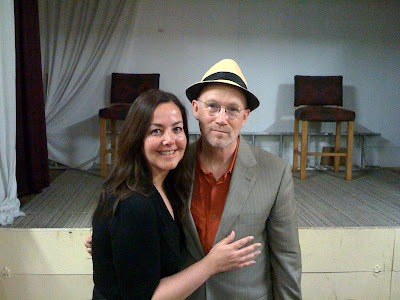 I was this close to giving him a big 'ol smack on the cheek, but no...
Yesterday John surprised me with a night out for out anniversary - 21 years! Fiona says our marriage can now go to a bar, which I guess is how many a marriage ends up, heh.

Anyway, he took me to dinner at a place I'd been hankering to go which might now be my favorite restaurant. We went to Cowboy Star, which is directly across the street from my buddy Ken's place. It's lovely inside, nouveau rustic I guess you could say, with cowboy music playing. That was almost enough to make it perfect, since, if you didn't know, I'm a sucker for cowboy music...my car is filled with cowboy cds and for the longest time my cellphone ring was Happy Trails. I also love cowboy poetry, films, memorabilia, or basically anything else related to the Old West and I can yodel the strays in with the best of 'em. Didja know that? 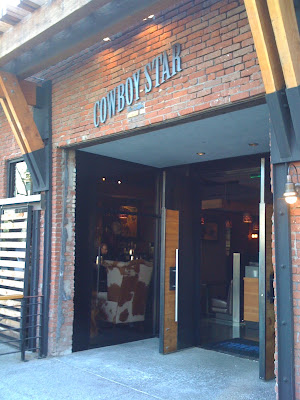 I had a fantastic salad followed by the Elysian lamb, while John ordered a beet salad and the bison steak. They were both really good, but the bison was superb. I'm almost sorry we tried it because now when we go back we'll have to order it again, so it'll be slow going working our way through the menu! 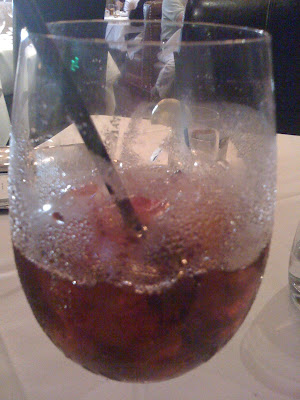 I also had what was basically a vase of very delicious sangria and learned a valuable lesson: I need to carry a to-go cup with me all the time, because that could've lasted me several hours. 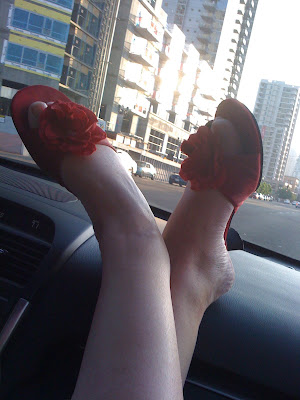 Self Portrait After Sangria
After dinner John took me up to Adams Avenue for the real surprise - and I was completely clueless until we were actually in the venue! Marshall Crenshaw was playing!!!!! I've been a fan since...I don't know, way before I was married, maybe 28 years or more, and we've seen him I think every time he's passed through SoCal. Last night it was just him with two guitars and a plank of wood on the floor as a drum kit, and his voice was still pure as can be.

We stood in line for an autograph afterwards and I (threatened) told John that he'd better get a good picture with his iPhone...everyone else went up, got their autograph politely, and left (Marshall says his audience now consists of the "NPR crowd") but, you know, I was excited to meet him and we Californians are friendly people so I made him get up and give me a hug - hence the somewhat stunned/bemused expression on his face in that there picture. Also, I made John take it three times to make sure it was okay.
Posted by Windansea at 7:20 AM

congratulations! :) you made john take three shots--so which one is this one?

Thanks Bea!!! I can hardly believe it's been that long!

g-girl, there was one that was just a big blur, and the other one wasn't so great either - good thing this one turned out or that would've been a sad end to 21 years of marriage, lol!!!

A guy at work posted yesterday that Jim Carroll died. And I had to provide my "cool" credentials and brag that I'd seen the Jim Carroll Band live (at the Country Club in Reseda) so today he brought me a New Wave mix (Steve told me NO ONE IN IOWA listened to new wave). Anyway, the first song was Marshall Crenshaw, so I had to share YOUR post.