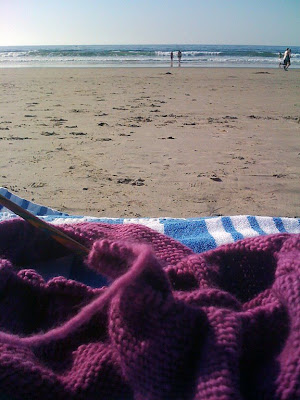 See those specks walking into the ocean? Those are my daughters bodysurfing in 55° water, no wetties.
My knitting mojo has been very iffy this last month. I have frogged the Just Enough Ruffles scarf you see above not once, not twice, but three times trying to get at the root of a problem that I probably needed just to turn a blind eye towards - something nobody would notice, ever, but me, and since this is probably going to be given away, I'd never see it again anyway. I am at the point where I have to increase to 600 stitches, so I thought I'd take my knitting to the beach and try to relax about the whole thing. It was a nice outing for scarfy, especially since I just let it sit at the end of my chair without touching it the whole time. This should teach me not to knit the same thing twice.

I'm also working on a gathered scarf that took a big left turn last night. After eight repetitions of the pattern, I found myself with an unmanageable urge to bind. off. now. So I did. I added a row of buttonholes in the last bit of garter stitch and bound off, and today I will decide what kind of garment it's become. Is it a neckwarmer? Is it the body of a little sweater? I don't know.
I am happy to have any knitting news, though...I have a lot of photos of food to blog but I don't want give the impression that all I do is cook to support an unhealthy obsession with sweets. Not that it wouldn't be true, but I don't want to give the impression. 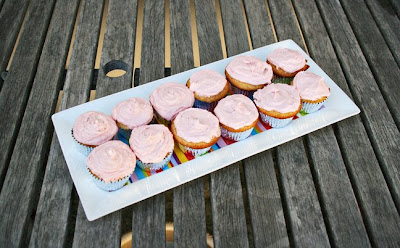 Truth be told, I bake a few times a week - so much that my family isn't actually too interested anymore (although it has ruined them for store-bought dessert). I made some cupcakes on Tuesday for a birthday party and looky here - I still have all of these left over. Left to my own devices I'd eat every one, but I'm just going to take their picture instead, press them upon anyone who stops by, and then throw the last, sad, uneaten ones, all the while convincing myself not to give in. These cupcakes are the Magnolia Vanilla recipe (follow the timing directions for beating the batter or risk ending up with little bricks) with frosting from Billy's recipe. They are the bomb. And my family is crazy. 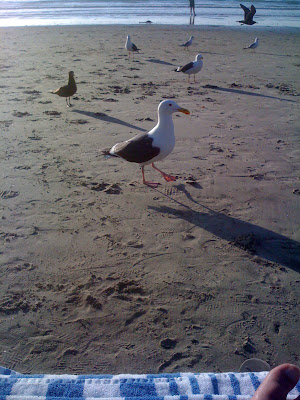 Hey lady, what are you knitting? And PS, you need a pedi!
Posted by Windansea at 8:00 AM

well, your current just ruffles looks great against the beach background if that's any consolation. :) your family isn't interested anymore in your baking? that's it, i'm moving in! the cupcakes look scrumptious. :)