I Swing Both Ways... 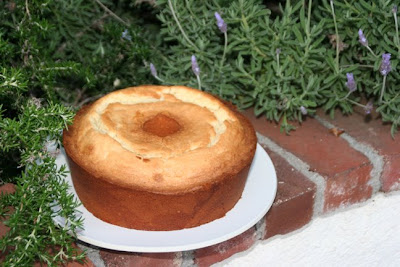 I don't usually stick my baked goods into the shrubbery, but it seemed like a good idea at the time.
That's right, baby...chocolate AND lemon. I know a lot of people, including members of my own family, that have a dessert preference. They are either chocolate people, or lemon people. Rich decadent dessert people, or berry dessert people. I say, life's short - why choose? Lately it's been lemony around here. It's Spring.
In the spirit of the season, yesterday evening I went over to a friend's house to make Spring care packages for our college freshmen daughters. We get together every couple of months, and we all bring a little food to share for dinner and a little something for the boxes. 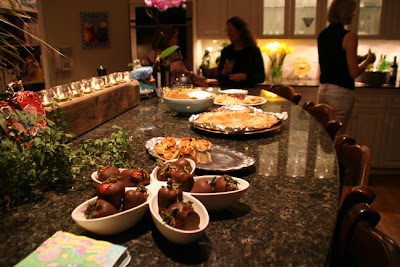 Look what other people brought: those are homemade chocolate-covered strawberries, people!
Last night there were 16 of us, so the girls will each get a box with 16 items ranging from homemade cookies to peeps (gotta have peeps!) to little bottles of hand lotion. And of course we all had fun visiting and making the boxes up, although really the boxes are just an excuse to get together. 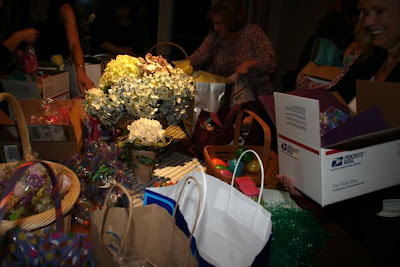 Do you find it interesting that I took pictures of the food and the boxes but not of my 15 friends? I'm worried it means something fundamental about my personality, but in the meantime I'll just take another picture.
My contribution was this lemon pound cake, which also came with a berry coulis I didn't take photos of. This is the recipe here, although I did make some changes...I used Neufchatel cheese, which I think has a more delicate flavor, and when I added the vanilla I also added the zest of one lemon, cuz I'm all about lemon zest. (Unless I'm being all about the Valrhona chocolate. But I digress.) And since I used the zest, I omitted the almond extract. Mine takes longer than the suggested time to cook, and about 45 minutes in I made it a little aluminum foil umbrella so it wouldn't burn on the top while it was still goopy in the middle. That's not good. 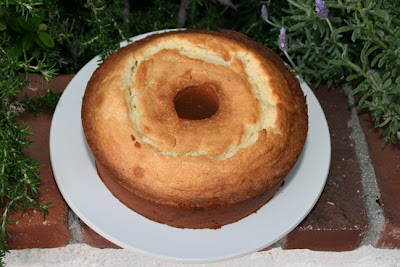 For the coulis, I used a bag of frozen mixed berries that I let thaw on the counter while I was making the cake, and I did add a little water to help make it the right consistency. This is the third time I've made this cake, and the last time I made blueberry coulis, which was also very good and, I think, a nice combo with the lemon. The cake is dense, slightly crunchy on the top, and has a really really nice flavor. If you bake it in a tube pan I think you can easily get 24 - 32 servings from one cake, too, which is nice for a larger party. 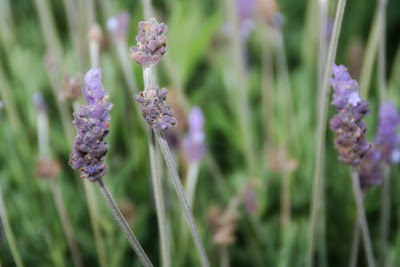 And since we're here, let's see another shot of that lavender.
Posted by Windansea at 8:22 AM

that's so cool that you get together with a bunch of other moms and do college care packages! where were you ladies when I was in college? ;) you're makin' me hungry again..