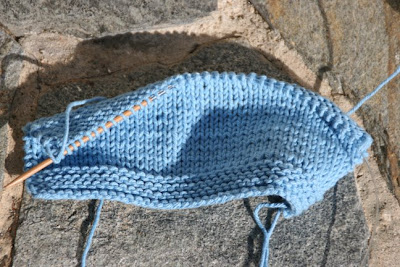 This weekend started out so nicely...Friday morning Mary's school had a "Solarbration" to flip the ceremonial switch on its new solar power system. The mayor was there, the kids all sang "You Are My Sunshine," and our faith in humankind's ability to reverse global warming was restored as long as we turned a blind eye to all the parents' SUVs (my own included, mea culpa) parked out in front.

Friday afternoon the weekend took a bad left turn (Squeamish people or those wishing to avoid TMI should stop reading here and just look at the knitting.). My mom called to say my dad had an infection on his foot that didn't look too good, and that the doctor told her to head to the ER. My dad is 86, with so many chronic health issues that we're not exactly sure what keeps him going. I think it must be the Gallego genes...his own parents lived into their 90s.

Anyway, I met them at the ER, where we spent all of Friday until midnight talking to a series of doctors about things like amputation, advance directives, and everything else you never want to think about in conjunction with anyone you love, or really, with anyone at all. At 1:00 am they admitted him, at 2:00 am they took him in for a stat CT scan because his blood pressure was crazy high - turned out to be temporary so that was good; they medicated him and then he just sort of calmed down - and simultaneously they started him on two broad-spectrum antibiotics. 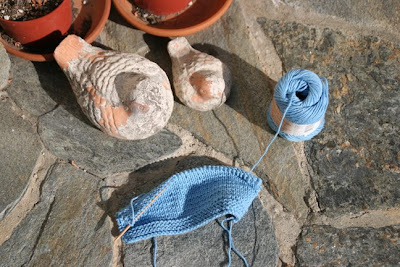 Today he is, I think, much better. His spirits were higher, his feet looked better, and he ate half an English muffin for breakfast. The first thing he asked me early this morning was how the Deportivo finished yesterday, and he was delighted to hear they won over Sevilla 2-1. Just goes to show you what people can have on their minds in times of crisis.

The doctors think he'll have to be on IV antibiotics for 4-6 weeks (!) so he's going to need a PICC line inserted...we know all about those now thanks to my niece's lymphoma last year...but all of the drastic measures are now only distant possibilities, thank God. 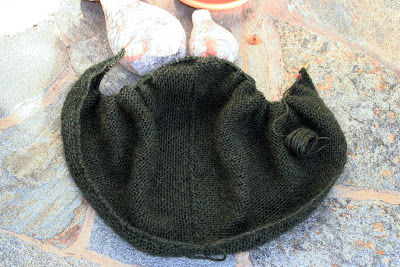 I knitted until I was sick of knitting, and I listened to Duma Key and watched Damages on my iPod. I managed to finish the garter stitch middle of my Wool Peddler's shawl and then started on a cotton baby sweater since the lacy border on that shawl is a task best undertaken with fewer distractions. In a few repetitions I'll hopefully have the pattern down and be able to take the border on the road again, but until then it'll have to be simple stuff.
Posted by Windansea at 3:28 PM

Oy! Maybe it's the great attitude that keeps your dad going. I'll keep a good thought for him.

I'm sending well wishes your dad's way. So glad he is on the way to better though!

The shawl looks cozy and warm. Its lovely so far. I think the horseshoe lace wasn't difficult to memorize when I made it.