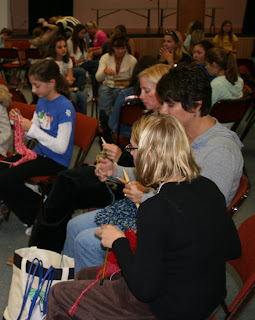 It's that time of year again - our National Charity League group gets together to knit for those in need. If you don't know, NCL is a mother/daughter philanthropic organization for girls in grades 7 - 12. We do service work all year, but every December we get together and do a bunch of hands-on projects at one of our meetings, including knitting scarves for whichever group we pick that year. This year we're donating our scarves to St. Vincent de Paul and also to the Salvation Army here in San Diego.

But guess what? Not everyone knows how to knit!! I know it's hard to believe for all of you - since I assume if you're reading a knitblog you - hello!! - knit too. So a large portion of that December meeting is devoted to TWK (Those Who Know) casting on for FAKs (Future Avid Knitters).

DD#2, the Lobster Sweater designer, managed to knit two scarves AT THE MEETING. That girl's needles are on fire - I can only wish I knit that fast. DD#1, a non-knitter for the most part (except for Batman hats), is starting to be converted - she has a good start on a scarf that should be done without too much delay. DN#3 (Dear niece) knits really fast this year and was almost done with hers....too bad finals are around the corner for all three of them or they'd be sitting pretty.

Wait till next month, when I post a photo of the finished scarves - knit by 200 people, some of whom will emerge with a real love of fiber by the end. In the meantime, there was an awful lot of this, knit up on the biggest needles people could find: 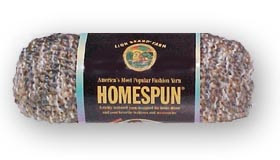 Posted by Windansea at 8:20 AM

that's really awesome that your organization does this! I don't think I've ever heard of it before. I can't wait to see all the scarves. :)

I know....isn't that cool? We do a lot of different stuff but this is everyone's favorite meeting - no talking and all knitting! Lydia