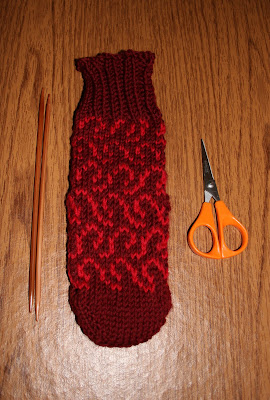 I'm not a big sock knitter. I live in flip-flop country. But sometimes.....I get a hankering to knit socks. Plus I had to cast on a stranded project to stay involved with a KAL I belong to. (This was before I knitted the Christmas ball in yesterday's post, which I'm definitely counting - it's stranded, right?)

I had some Cascade superwash left over from the infamous off-center placket sweater and some random lighter-colored worsted in my stash. I cast on for a toe up sock (my favorite!) using the method where you knit into the backs of your cast-on sts to start. I fooled with graph paper until I came up with this scrolly pattern (don't ask me why it's showing up BLUE either - that's not how the image looks here!):

I knit in a tube until I got to the heel, and then - disaster. I had to put the whole thing down for two weeks to allow the swelling in my brain to subside, because figuring out how the !@#$ to put in a heel on a stranded project almost made it explode.

First I tried a heel flap, which I frogged no less than three times while I alternately figured out I'd wreck the instep pattern when doing the gusset decreases and then convinced myself it was all in my mind.

Then I decided to use waste yarn - I've seen it done - and an afterthough heel. But wouldn't that wreck the pattern on the back of the sock? Which I realize now is actually on the bottom of your foot, so who cares?

And finally I decided to do the unthinkable. For me, anyway: 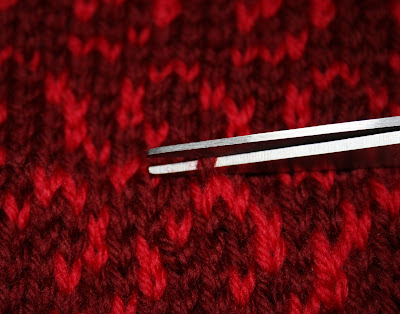 SNIP! I cut the stitch you see above, right in the middle of the heel. I unraveled (or is it "raveled"? I can never decide....) to both sides. I figured out I had to cut the contrasting color. I unraveled that too. I picked up an appropriate number of sts, and knit a "toe" like Elizabeth Zimmerman told me to.

I weaved in, I blocked on a hanger (which was easier said than done, bending that hanger into a foot-like shape). 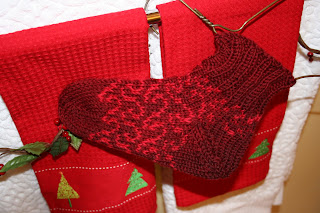 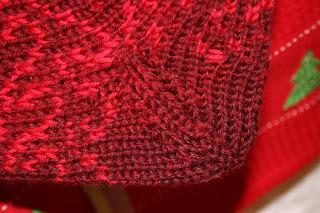 I tried it on Mary's foot - cuz it's for her. My guage for some reason tightened up between the casting-on honeymoon phase and the heel phase (repressed heel rage, anyone?) so it was a little hard to get on, but once on it looked, well, custom-made for her!!

And then I saw this: 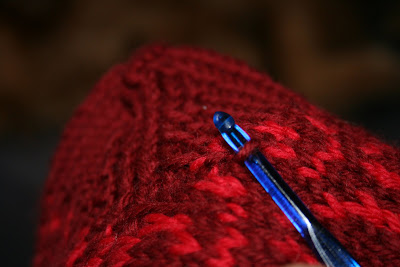 Yep, that's a renegade stitch, laddering away from the heel as fast as it can. I'm about ready to burn this sock. I don't know how Patty can sleep through it. 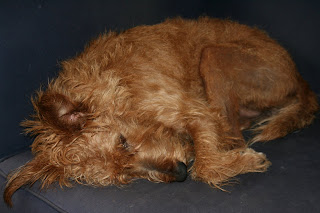 Posted by Windansea at 8:43 AM

Ooh, I love the pattern! It would make great mittens, too. You were very brave, cutting the yarn – that would terrify me too. But they're beautiful – worth saving!

Wow, what an absolutely awesome pattern! I had to gasp a bit when I saw that you were cutting the yarn - but how very brave of you to do so, and it seems to have done the trick, no? Totally fantastic work!

The sock looks beautiful! I agree with Hilary, you were very brave.