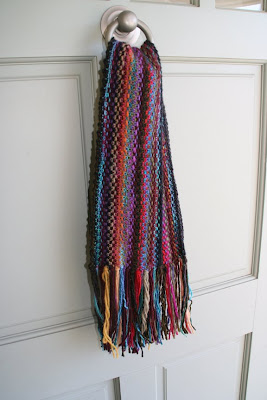 Last night I bound off a scarf made entirely of leftover scraps of worsted yarn. It's from this formula, which works for any kind of leftovers in any weight - pretty cool. 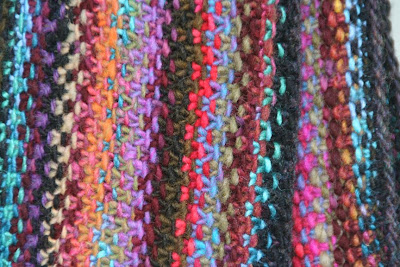 For mine, I cast on 240 sts of some nice charcoaly Noro Kureyon and then switched colors and yarns (mostly different remnants of Kureyon and Malabrigo worsted - the bright blue is some extremely wonderful Malabrigo silky merino) whenever I felt like it...I kept the ends all on one side and then worked them into the fringe so I wouldn't have to weave them in - let's hear it for not weaving in! I just made a half hitch to keep them in place and the added fringe anchors them well. 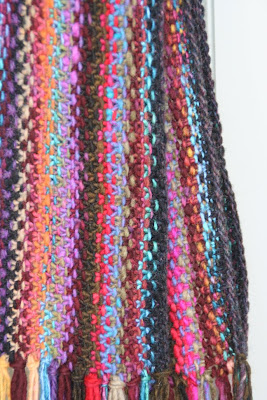 The pattern creates a pretty firm fabric, so I was a little afraid it would be sort of misshapen or scrunchy when it was done, but a nice bath in Eucalan relaxed the heck out of it and the finished dimensions are 7' without the fringe and about 6" wide. I considered pinning it out and hitting it with a little steam to make it a bit wider, but decided against it - I like it this way! Off it goes to Vermont, as a thank-you gift to the nice person who invited Fiona home for Thanksgiving!
Posted by Windansea at 11:17 AM

I love the texture and color!

Two Cables and a Frapp said...