One Down, Two to Go 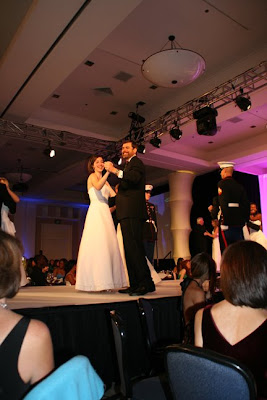 Yesterday was Fiona's Senior Presents event for NCL, so we've made it - one daughter through six years of community service and six years of boring meetings she chafed at and griped about. She knitted baby hats for preemies, she served food to the homeless and seniors, she delivered Meals on Wheels, she collected cans, she gave birthday parties for kids in shelters, she built Habitat for Humanity houses, and she performed many many other hours of service I can't even catalog, across many areas, to get to this point. Did I mention I had to be there for most of it? I draw the line at beach cleanups and made sure she had a ride to those, but mostly, we did it together. Anna's still in the thick of it and Mary hasn't even started yet, but they'll do it too. 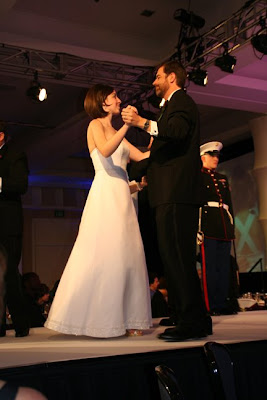 At the end of the six years, the girls don white dresses and come out, escorted by young Marines and then by their fathers. For us, this was Fiona's graduation celebration. Our whole family was there, two loud tables of us, cheering her on. You can see her laughing with John because I was whooping it up to make them look at my camera!

Can you see I live in the land of the giants? John is 6'5" as a point of reference. I figure by the time Mary's 12 or so, I'll be dwarfed by all and never able to reach whatever gets put away on the top shelves of my kitchen. 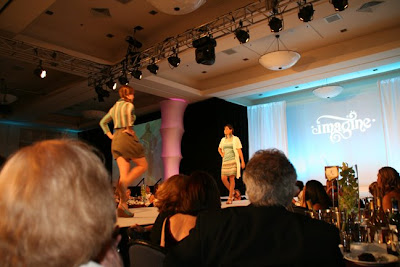 The senior girls join their families for dinner and afterwards there's a fashion show for the sophomores and juniors. Anna and my niece Elizabeth got to model high-end boutique fashions and did their best Project Runway strut - very fun.

Speaking of those Marines, how awesome are they? The one who brought Fiona out told her that he had very bad stage fright! They are barely older than the girls - they told her most of their friends were attending college now. But - this is the amazing and heartwrenching part - these boys, the same age as Fiona's friends practically, are all Iraqi war vets. At an age when her friends are still being coddled by their parents. I was proud of them and wanted to cry at the same time...our young people should all be in college, all safe.
Posted by Windansea at 9:26 AM

This seems really awesome for the girls! What a great way to end your high school career. And you are totally right about the marines. Simply amazing how young our vets are now.

PS Thank you for your comments on my blog. I was trying to find an email to answer you back and couldn't :( I am at yarnpig [at] gmail [dot] com

It's almost looks like a wedding from the pictures. You'll really be tearing up when that day comes!