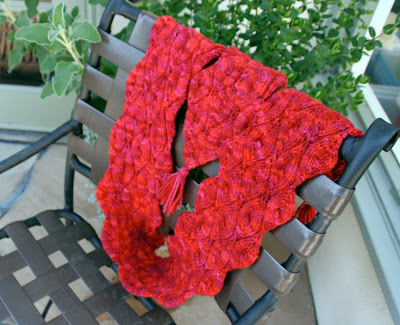 The Candle Flame scarf is done! I finished it earlier this week and then gave it to my friend Tracy (she of chenille scarf fame) this morning as a belated birthday gift. 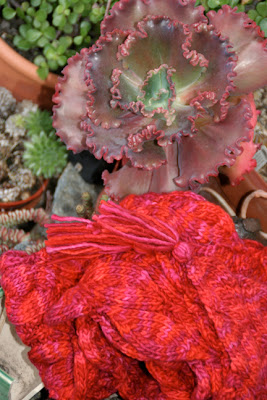 The yarn is more of that wonderful Malabrigo merino worsted in the Amoroso colorway. The pattern is here, and I knit it pretty much according to pattern except for two little mods: I started the scarf by casting on three stitches and continuing the pattern from row 2, and instead of decreasing by S2,K1, PSSO, I used a S1, K2tog, PSSO just because it's easier to do. I also added little tassels made from the tiny bit of yarn that was left over. I gave the scarf a very light steam block to keep the ends from rolling under. I really like the textural, bumpy quality and didn't want to lose that. 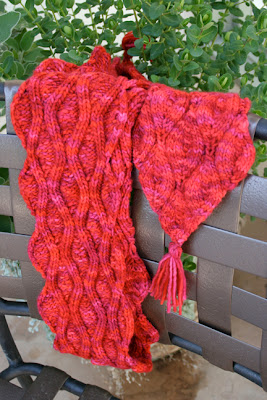 Posted by Windansea at 7:50 PM

Pretty, I'm sure your friend will love it!

It's lovely, very project spectrum appropriate too. I love the look of the back side as well.

Thank you! She did love it. She skis, so it'll get used even though we rarely need wool here. :)

Thanks for sharing this pattern. It's in my queue now.

I was recently "tagged" and enjoy viewing your site so I am tagging you. You're invited to have a turn if you wish. The instructions (as passed along to me) can be viewed (if you wish) at http://thetreadler.blogspot.com
Although it is remenicent of chain mail there's no promise of "great reward" if you participate nor any threat of "tragic misfortune" if you opt out. ~ Just for Fun ~
Take care,
The Treadler