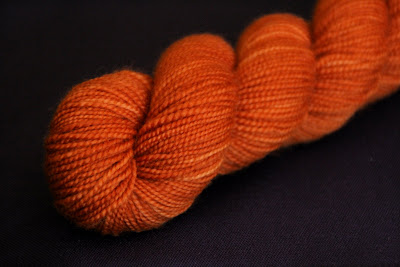 I'm posting this from my BIL's commuter apartment in sunny Mountain View, CA (home of Google) and where we have been staying since Thursday night. Mountain View is actually a cool place - there's a little downtownish place where there are a couple of blocks of cheek-to-cheek restaurants, most of which have sidewalk tables and all of which stay open into the late evening.

Fiona and I have been looking at schools, so far hitting Sta. Clara, Mills, Berkeley, USF, Stanford, St. Mary's. On Tuesday we leave for Sta. Cruz, San Luis Obispo and points south.

I was totally expecting cooler weather so I packed kind of wrong (Why oh why are my beloved flipflops in La Jolla?) and even optimistically packed some of my knitted warmy things, but it looks like they'll go unused yet again.

Yesterday we were only going to visit USF, so we thought we'd go on a little yarn crawl first. Armed with mapquest directions, we made our way to Uncommon Threads in Los Altos. First of all, Los Altos has a cute little shopping area, much like Girard in my beloved La Jolla, but SO MUCH BETTER. Sigh. 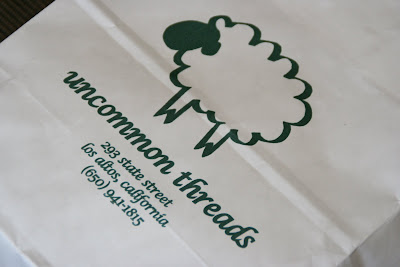 Anyway, Uncommon Threads is a great yarn shop...in my opinion, not as great as Knitting in La Jolla, but it is roomier. I got to see a ribwarmer all knitted up, which I'd never seen before except in photos. And which, PS, I won't be making one of anytime soon, at least for myself. I think it would actually subtract inches from my height and add them to my hips - no thanks.

I also got to touch a bunch of Jamieson's wool, which I've almost bought a boatload full of before sight unseen, and discovered it's scratchy. Even after swatching. Even after washing. Still a little too scratchy for me. So see? Yarn shopping ends up saving me money in the longrun. 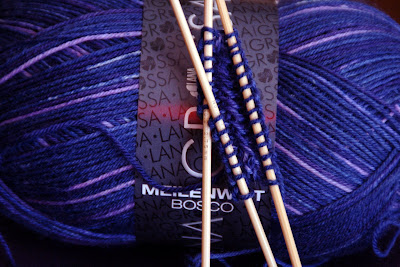 Instead I came home with some of my beloved Koigu, which was there in the flesh and you see pictured at the top and below, and some Lana Grossa sockyarn, and some little 4" dpns in size 2 for said sockyarn. Remember, it's vacation yarn! 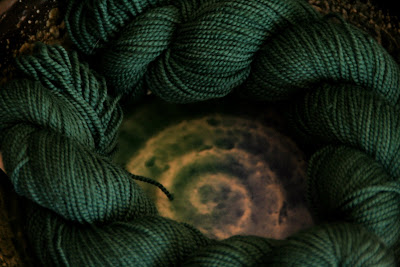 After Uncommon Threads, we hit the 101 north and headed for ImagiKnits in San Francisco. It turns out that ImagiKnits is smack in the Castro, where, I'll tell you right now, people are having a damn good time on the weekends. In looking for a link for you just now, I found out that I Remember Mama took place in the Castro...it doesn't look like, however, you'll find anyone anyone vaguely resembling Irene Dunne there now.

Fiona tried to get some pictures of the local landmarks from my moving vehicle as we cruised for a parking spot (in vain), but sadly, no photo of Moby Dick. We gave up trying to park and headed for USF (pictured below) instead. 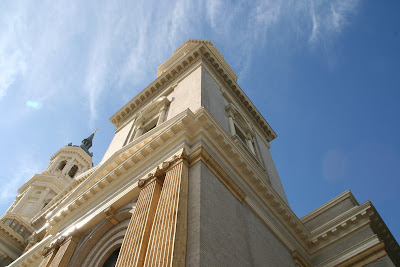 Last night we took in a show at the Eureka Theatre on Jackson, where the 42nd Street Moon puts on lost or obscure Broadway gems from the golden era. We saw Plain and Fancy, a musical about the Amish, I kid you not, from way before Weird Al even had the idea for this. It was actually fabulous!

Despite the parking, San Francisco remains just about my favorite city. It's got the culture and the art scene, it's got nightlife, it's got great food, and it's tolerant. It's tolerant almost to the point of being intolerant, true, but I love it. And everywhere you look, there's something beautiful.

And now, since it's Sunday, your weekly dose of Snoop, weighing himself. 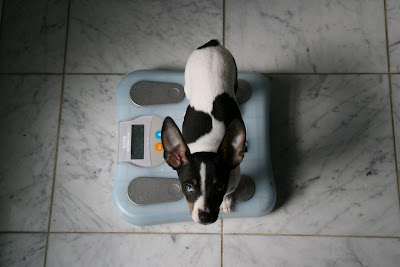 that koigu is gorgeous!! what'd you two think of Mills? I went there for grad school and still love it to this day! Oh and what'd you think of Berkeley?? I'm waiting to hear! I'm so jealous that you got to go to some yarn shops up in the bay! I have yet to check any of them out. There's a few in Oakland as well!

Thanks for your comment! Snoopy is so cute -- and he and my puppy do look a lot alike! :)