A Night Out, a Morning In

The other night John and I attended a gala fundraiser for the Old Globe, one of San Diego's several fabulous theater companies.  The Globe and the La Jolla Playhouse are probably the most widely known, and they're two of the reasons this is such a great town to live in, along with fish tacos and the weather (notwithstanding the sucky summer of 2010).  But if you live here, there are lots and lots of opportunities to see interesting live productions all over the county.

You wanted to see what they served, right?  Luckily, I had my iPhone to capture these quality shots.  I wish I could show you how they light up the Museum of Man tower next door - it's really cool - but I'm already stretching the capability of my phone with these.


And while I'm showing you food, here's a batch of brioche from the following day.  Fiona learned Dorie's method for the dough, and I baked these off the next morning so she could sleep in during the final rise.  That's right, I'm the BEST mom, kids. 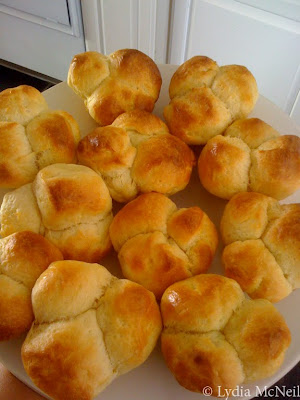 Posted by Windansea at 7:08 PM

the salad looks delish..the almond dessert interesting but the brioche! yum!!! oh, and we already knew you were the best mom! ;)

What great food photos! And the brioche looks wonderful.