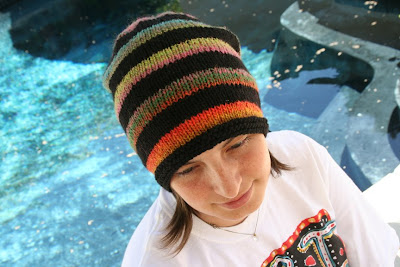 For those of you complaining about my lack of knitting content - this one's for you. Two posts in a row about knitting! But don't get used to it. The subject matter of my blog posts will just have to be one of life's little uncertainties for you. It disappoints me too, my friend. If only I had an extra pair of hands.

Anyway. This is a Cinchy Hat, knit up in a random Noro Kureyon and black yarn of similar weight I had in my stash. I ended up using about 75 - 80 yards of the Kureyon and a little less of the black, and I knitted half the hat at the dermatologist waiting for Fiona, another quarter at the pediatrician waiting for Anna, and the last quarter watching Michael Phelps win another gold medal, no waiting involved. 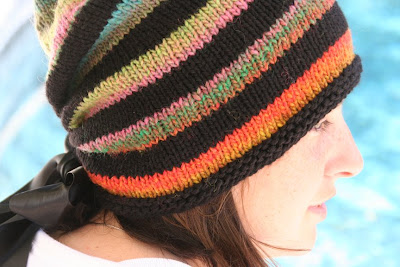 Weaving in the ends took a long time, because I just hate doing it and for some reason that makes me do it sloooowly instead of racing through the horrible weaving like I should. In fact, I'd intended to knit this hat in only Kureyon to avoid weaving in, but the color was just too bland. The black makes it sing, at least in person. 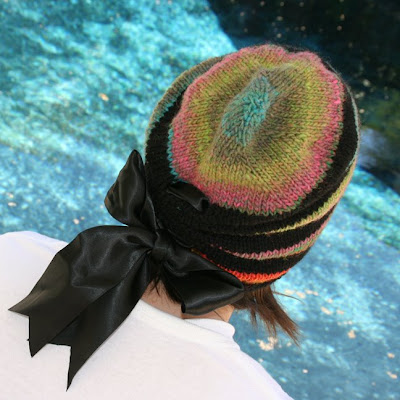 And, serendipitously, I spent the better of part of the day today cleaning out my office - a heinous task, because unlike cleaning out your closet, during which you can fantasize about all the new clothes and shoes would now fit in there, if only you were rich and thin, cleaning out your office is basically so you can do more work. So that's not the serendipitous part. The serendipitous part was I found some black satin ribbon under a bunch of papers on the little couch on my office (Yes, there's a couch in my office but it might as well be a table.) and so I was able to thread up the back of my Cinchy and scrunch it up for pictures. 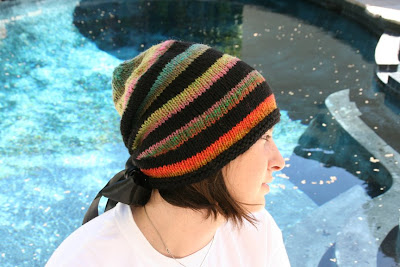 Cinchy's going to Vermont with Fiona, but Anna was kind enough to model it for us.
Posted by Windansea at 6:00 PM

Looks great! The black stripes are just what it needed.

very nice..it looks like she's the one actually modeling it on the knitscene site too! oh, we don't need to hear about knitting! ;)

That's a great hat! It will definately keep anybody's head warm for those cold Vermont winters!

so very cool..........chic.....hip noggin warmer. I was worried this summer you were going to start knitting bagel holders or scone warmers.

The hat is lovely. However, I don't know when you'll be wearing it in La Jolla? I live in Southern CA, too. However, perhaps you go skiing?