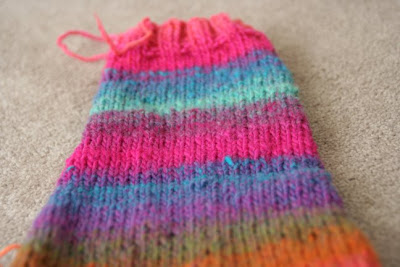 So yeah, I'm still working on the Wool Peddler's Shawl, and the Mystic Light shawl, and a few other things, but you know me. Gotta be starting something. So I had this Noro Kureyon in my stash, three skeins, not enough for a sweater, too much for a scarf.

Now it's sleeves. I cast on willy-nilly, knitted through one ball; cast on another, knitted through the second ball; and now I've joined the third ball and will add caps to both sleeves. I spent a loooong time figuring out whether I could do a seamless join to the sweater body (gray Peruvia, as yet unknit) and reading about intarsia in the round, and finally decided just to suck it up and knit the caps and seam later. I should've started from the top, but like I said, I started willy-nilly.

Anna is finally coming home on Thursday. It feels like she's been gone forever...and I won't be here when she gets back. Fiona and I are leaving this afternoon for Boulder, to look at CU. We're in that period where the yay/nay letters are arriving from the schools she applied to, and while we do have some yays from places she likes (Bennington at the top currently) she also got accepted to the theater program at Boulder and we thought we'd go see what it's like. We've been to Boulder before, but it's been a long time and Fiona was a lot younger - college was on the distant horizon back then. And while Boulder's beautiful, now we'll be looking at it from a different point of view. Boulder admissions people, if you read this, you might like to know the kids on Facebook have adopted the slogan, "Of Coors I'm going to Boulder."

While in Boulder, I plan on visiting Shuttles, Spindles & Skeins, and I hear you can tour the Celestial Seasonings place...I tell you, I'm an exciting vacation partner. I'm not sure Fiona will be able to keep up. 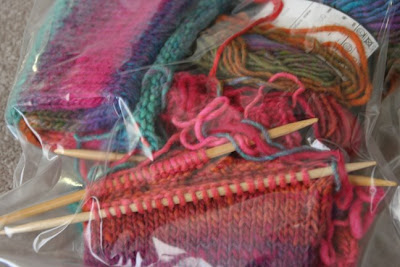 Posted by Windansea at 7:47 AM

Your sleeve is pretty. (I have to say I love the name fiona too!)

I have driven through Boulder a couple of times, but have never stopped at SS&S. We've always been on our way to Estes Park or the airport and didn't plan well enough to stop. Can't wait to hear what you think of it.

Thanks bea! I'm hoping either of my teenagers will wear it. It might be too "rainbow" for them. Lydia