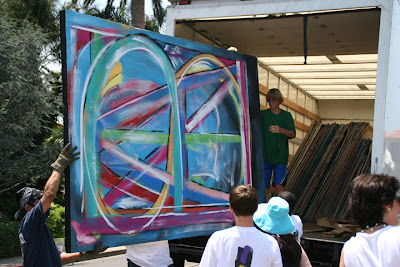 I'm not sure why I have a knitting blog when as it turns out I have a yearly pattern of taking six months off starting in the spring every year. I should really take up some hobby that I could talk about for the other half a year. 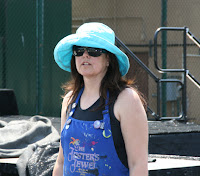 Oh wait, wouldn't that be the yearly creation of the Jewel Ball. The very reason I can't knit being the countless hours of computer work that make my elbow hurt too much to hold knitting needles? Yes, this is me in my blue hat, looking the way I do for a week every August...the end of a jam-packed year of putting on that party. Thanks for another flaterring photo, Fiona! I can only blame the camera angle for how those arms look sleeveless, since the truth would be too painful.

Luckily, this year's Ball was soooo much fun to put on - we got to paint gigantic recreations of famous art pieces (which, who knew the same muscles that don't let me knit and drive a mouse too much at the same time are also affected by wielding a giant paint brush) and hopefully raised buckets of money for our beneficiaries.

I hurt my left thumb during the week we set the Ball up, so I was in a cast for a couple of weeks from that, and then I hurt my right pinky, and we had a Santa Ana that made it unbearable to touch anything other than ice cream, so I haven't knit at all. Like, since April. I know, wah wah wah. You want to offer me some cheese with that whine.

On the creative side, I did have a very productive spring and summer graphics-wise.
Posted by Windansea at 8:09 AM