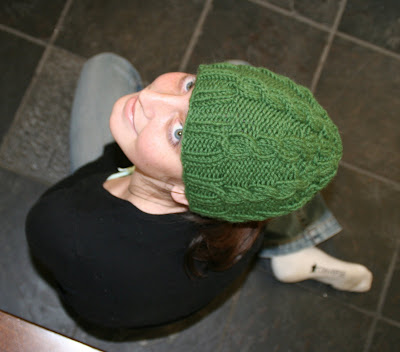 Get it? Anna of Green Cables? Anne of Green...okay, it's lame, I know.

Because St. Patrick's Day is coming up and there's a green hat KAL and all, a green cabled hat made from one hank of Knitpicks Sierra.

It fits my 23" head, but since it's cablicious it also fits Mary's head with the brim folded up and Anna, whose head is a bit larger than mine (She actually said it was snug, although I don't see her eyes popping out or anything. Instead, that same sort of amused expression she always gets in one of my hats...the look that says "Other moms go to work, or drive a soccer van, or drink a bottle of white wine in the afternoon....my mom has a knitting blog."). I was going to show you how well it fits me, but the day I took this picture I was wearing my Old Navy camo pants and a black hoodie, and when I put the hat on all that was missing was some of these. 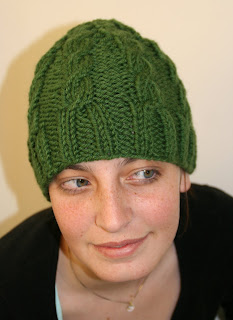 You can add length to the hat easily by adding more ribbing at the bottom. I personally don't like anything folded up on my ears, hence all the beanie-style hats I like to make.

Yarn: Knitpicks Sierra, 1 Hank.
Needles: 1 16"circular & a set of dpns in size 7, or whatever size gives you gauge (I knit big, so knit a swatch! The needle size on the ballband said 9-11)
Gauge: 3sts/inch in stockinette (To see this hat in a smaller size & gauge, check here.)

Please note: if you downloaded this pattern before 12/5/07, there was a missing purl stitch after the p2tog in the 2nd round of the Third Cable. This has been fixed.

CO 72 sts on the circular needle (switch to the dpns during the decreases) and join for working in the round, being careful not to twist. Place marker to indicate beginning of round.


Third Cable - In which you start the decreases.

Work row 1 as in First Cable.

No round 5 on this cable!

Break yarn and thread tail through remaining sts, pulling tight to cinch closed. Pull tail through to wrong side and weave in ends. 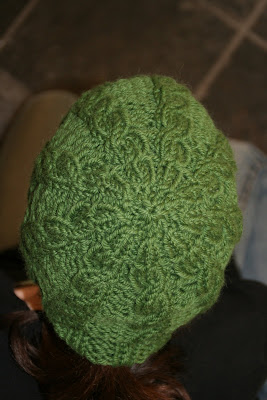 Copyright 2007 Lydia McNeil - You may not use this pattern for profit or reproduce it for profit; you may use it to knit hats for yourself, for others, or most certainly for charity, but not to sell.
Posted by Windansea at 10:02 AM

Fantastic job! I love that color green and the added texture of the pattern really shows off the yarn well.

thanks moira! it was fun to knit - very fast, instant gratification, which I love. Lydia

Oh wow, this hat is totally beautiful!!! Thanks so much for sharing the pattern - I'll print it out right away and try my hands at it soonest possible! The green colour is so gorgeous too, and I'm really impressed by your neat and even cabling! Great!

i love the shade of green you used and it looks really nice on anna! i love how the hat looks around the crown too. you might be seeing this one pop up on my blog soon. :)

I love the hat! I tried a similar version for DH, but it came out so small, my son got it instead. Your version is inspiring me to give it another go at some point. Anyway, I wanted to say thanks for checking out my blog and thought I'd check yours out. It's great...always love to see what other knitters are doing :)

Nice pattern! I'll have to try this one too. Again, the decreases are lovely.

Did you notice that Knit Picks currently has a few colors of Sierra discounted? (They must be discontinuing these.) I just ordered some to pust in my yarn-for-experiments stash.

I love this hat. Janine of Feral Knitters is having a St. Patrick's Day party for Dulaan and I don't have anything started. This will be perfect!

I have wanted to knit a cable hat for a while now and I love the ribbed edge on this one. One of my favorite things about knitting is when I am knitting from a new pattern and the "light goes on". I am about halfway through and yea! I think I got it. Thanks for sharing. I hope mine turns out as nice as yours. And I now realize why my blog is suffering so; that darn bottle of wine... :)

Hi Valerie, thanks - I'm glad you like it!! That's pretty funny about the wine - My knitting could probably benefit from a little more! Lydia

Hello. Thanks for the pattern. I think, though, on the third cable, round two, there should be another P1 after the P2 tog? I could be wrong, I am just a novice, but that's what I ended up doing and it worked out for me.

thanks lanella, I'll check it out - I've made this hat again without noticing a problem but maybe I'm just skipping over that!

Yep, I had my buddy cactusneedles check it out, and now the typo in the Third Cable is fixed. Thanks! Lydia

Thank you so much for the lovely hat pattern. I've been looking for another one to try.

Thanks moonlink! Let me know how it turns out - Lydia

thanks for the pattern, mine turned out great besides the size but it was great for my niece, plus it was fun and easy to knit. I REALLY love the color you used it's great.

Hello , I am a begginer. Could someone tell me what SSK means (fourth cable). Thanks for your help

Hi anonymous, hopefully you will check back for the answer! SSK means slip, slip, knit. Check this site to see how it's done:

Thanks Windansea...the video helped me a lot. I still have a hard time to make this "Anna of Green Cables" but I will make it...

Thanks for sharing this pattern. I just finished it in black and I love it!!!

This is really nice pattern. I made it last night and this morning, and while I had to modify a little to suit my needle size and gauge it turned out lovely. I forgot to add 5 more rows of ribbing though, so it's a little short for my head, but should suit a little persons. I'm going to attempt the Horseshoe next. Thank you!

I'm sorry to be the party pooper, but I just finished this pattern, and it turned out to be more of a yammakah (sp?) than a winter hat! It might fit a small child, but not mine ) : Otherwise this is a really beautiful pattern, thanks for sharing!

So sorry, Anonymous...seems like you had a gauge issue?

I'm not really sure, but it must have been! I undid the crown and added 2 more cables, and now it fits beautifully. Thanks again for the great pattern ( :

Love this cable pattern.I bought a hat just like this one and my sister-in-law would like one.I have been looking for a pattern.Can i use shetland style 50g,75% acrylic,25%wool,15sts =4"?Linda Elliott.

I was just settling in to start knitting this hat when I realized that I don't know what weight yarn to use. You specify Knitpicks Sierra, but I haven't been able to find that yarn or even information about it to give me a clue what weight and fiber content I should be looking for. I'm guessing it's a bulky yarn based on the number of stitches and needle size called for in the pattern, but can you narrow it down a bit more for me? Thanks!!!

Hi Anonymous, you're right, it's a bulky yarn. Here's the info on it at yarndex:

You can substitute any yarn that will give you the same gauge, or try doubling a worsted yarn to see if that's close. Hope that helps!

I'm looking at trying a worsted weight yarn for this pattern, and I've figured out the number of stitches per row, and it seems # cast on stitches needs to be divisible by 8. But you don't give a length gauge - about how long do you think the hat should be before I start the decreases (including the ribbing, I guess)? That'll give me an idea. It looks like I'm getting 6 sts/in, and about 7 rows/in in the swatch I just knitted in stockinette.

I would like to try my hand at your great pattern, but I know I will need more than 72 stitches. What is your multiples?
Tks.
Lee

Crys, it's up to you - I like kind of short hats that don't fold up. You can pretty much try the hat on as you go and once it gets up past your ears to the part where your head gets narrower, you can begin decreasing.

THANK YOU!!!! I just knit this cap (in only 3 hours!!!) with a half a skein of Lion Homespun (a bulky size 5 yarn) for my daughter. I shortened the initial brim by a couple of rounds (my daughter's head is small) in purple (Lion's color name Baroque).
My DD just LOVES this hat! she won't even take it off!
I used size 9 DPNS for the whole thing. worked GREAT!!!! (i'll send a picture if you like.)
THANK YOU, again - now I'm a hero in my DDs eyes.

Why did this come out baby-sized????

I've never tried cabling before, though I've been knitting for awhile, and my name just so happens to be Anna. So I figured it was meant to be! About to print and try out your pattern! Thanks for sharing!

I've never done a cable knit before, though I've been knitting for a while, and my name just so happens to be Anna, so I figured this was meant to be! I'm printing out the pattern to try right now. Thanks for sharing!

I feel like I am missing something or I just don't understand how cables work in the round. The instructions are stating to only do BC4, and the results are different from the picture, which to me look like BC4 and then FC4 on the next cable and so forth (which makes them go in "different directions" making more of a braid than a spiral). Aside from that the pattern is working out beautifully. Is there something I have missed?

This is such a beautiful hat! I just got started on it and discovered that when I cast on 72 st and then K2, P2 around I end up with 2 K stitches at the beginning and the end of the round. I'm afraid if I change the number of st I'll have a problem later with the decreases. Any suggestions?